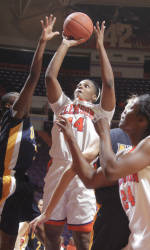 COLUMBIA, SC – The Clemson Lady Tigers fell, 73-59, to the South Carolina Gamecocks in Columbia on Thursday night. The loss dropped the Tigers to 2-1 on the season, while South Carolina improved to 2-1 and broke a two-game losing streak to Clemson. The Tigers were denied their first 3-0 start since Itoro Coleman’s senior season with the loss.

Coleman did not coach in the game, but is still eyeing a late-November return.

South Carolina took advantage of 24 Clemson turnovers, converting them for 28 points in the contest. Kirstyn Wright followed up her 29 point effort with 20 points for Clemson, and also added seven rebounds for the third straight game.  Sthefany Thomas had 11 to complete Clemson’s double-figure scorers.

Jasmine Tate had 11 rebounds for the second straight game to lead all players, and she finished just two points shy of a double-double. Bryelle Smith had seven assists for Clemson, her third straight game of six or more.

The Tigers couldn’t overcome a career-high 30 points from Ieasia Walker, who was the only Gamecock in double-figures. It was the first time Clemson allowed 30 points to an opposing player since last season’s 94-92 double overtime win against South Carolina, when Kelsey Bone netted 32.

South Carolina went on a 9-0 run after the under-eight-minute timeout to take an eight point lead, and the tigers couldn’t get closer than seven the rest of the night.

Ieasia Walker carried the Gamecocks in the first half, scoring 18 points on 8-12 from the field. Carolina had just one assist on 15 baskets, constantly using dribble penetration to knock down mid-range shots.

The Tigers return to action on Sunday as they take on Kennsaw State at 2:00 pm in Littlejohn Coliseum.