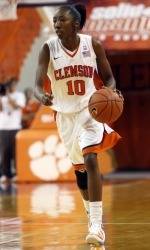 CHESTNUT HILL, MA – Boston College used a 18-3 second half run to pull away for a 78-49 victory over Clemson in Conte Forum in Chestnut Hill, MA. The Tigers (10-14, 3-6 ACC) will return home to take on nationally ranked North Carolina on Thursday at 7:00 pm in Littlejohn Coliseum.

Boston College (17-7, 4-5 ACC) used a big second half and turned their size advantage into a big rebounding advantage, grabbing 29 boards to Clemson’s 14 in the second half. The Eagles notched 21 second chance points, and the lid wouldn’t come off the basket for Clemson, as the Tigers shot 30.2 percent for the game.

Kirstyn Wright led the way for Clemson with 18 points, including four three-pointers. Sthefany Thomas had 11 and led the team with three assists, but was just 1-7 form behind the arc.

After the Eagles looked like the might pull away early in the second half, Clemson moved to within nine at 40-31, but BC responded with an 18-3 run to take a 58-34 lead with 8:48 to play. The Tigers did a solid job of getting stops, but struggled on the defensive glass, grabbing 21 defensive rebounds to 25 offensive boards for the Eagles.

Each team hit six three-pointers, as the two clubs entered as the top two shooting three-point teams in the ACC. Boston College was able to do much of their damage in the paint, hitting 17 of their 29 field goals in the painted area. Clemson was only able to knock in seven shots inside the paint for a total of 14 points.

Wright hit four of her seven three point attempts, and moved to within one of Chrissy Floyd for seventh on Clemson’s all-time three-point makes list.

Clemson hung around in the first half, going into the break facing a 31-23 deficit after going 9-29 from the field. Wright had eight of her points in the frame, and Linsdey Mason attempted a season-high eight free throw attempts in her 11th start of the season, and also pulled down a team-high six rebounds in the loss.