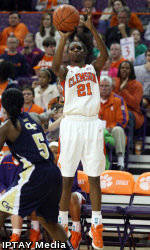 Senior Lindsey Mason had 10 points, six rebounds, and a pair of blocks in 32 minutes as the only other Tiger in double-figures. Chancie Dunn led Clemson with five assists and six rebounds, while Chelsea Lindsay hit for seven points and four assists.

Kristen Doherty had 17 points for the Eagles, with six of those coming in the final 5:38 of the game. No other Eagle had more than eight points

Clemson led at halftime, 26-24 after drilling a pair of three-pointers in the final 23 seconds, the ifrst a left wing shot from Dunn, and the second a top-of-the-key pull-up from Chelsea Lindsay as time expired in the half.

The Lady Tigers shot .526 percent in the half, hitting 12-23 shots, and pulled down 17 rebounds. Boston College committed to the three-point shot against Clemson’s zone, taking 17 of their 29 shots in the first half from long range, while just making 3-12 inside the arc. They hit six threes in the frame, and did not attempt a free throw.

Clemson opened an early lead on the Eagles’ home court, outscoring BC, 10-2 over the first three minutes, which included two hoops from Pettaway, who had a team-high six points and five rebounds in the half. Boston College started to steadily climb back in, as Dixon, Clemson’s leading scorer, had to leave the game due to picking up her second foul at the 14:54 mark of the half.

The Eagles went on an 8-0 run over a five minute span, taking a 15-14 lead before Gramlich put Clemson back ahead with a baseline jumper. The teams traded hoops, but back-to-back Eagle threes gave them a four-point edge with 1:31 remaining, which prompted a Coleman timeout. The Lady Tigers then hit the back-to-back treys to go into halftime with the 26-24 edge.

Dixon’s presence was felt early in the second half, as she hit three layups in the first three minutes after a pair of Mason free throws to give Clemson a 32-24 lead. In all, it was a 12-0 run that spanned halftime, going from a 24-20 deficit to a 32-24 lead. Clemson would keep the lead at eight at 38-30 after a pair of Pauldo free throws before BC put in four points in a row.

The Lady Tigers stretched it to seven again at 43-36 with 10:04 to play on Dixon’s layup-and-foul. Boston College again responded with five in a row, all from close range to pull within two at 43-41. Mason put a stop to the run with a turnaround jumper that hit all part of the rim before finally falling.

The Eagles tied it up at 45-45 on a back-door layup from Doherty, before Dixon answered with a layup. Doherty struck again from the mid-range, before Dixon hit a left-wing three with 4:24 to play to put Clemson up, 50-47. Dixon would later hit a free throw to put Clemson up four, but the Eagles would tie it up at 51-51 on a Shayra Brown jumper, and then take the lead as Doherty took a deflected pass for a layup with 39.0 to play.

Dixon missed a runner on the ensuing possession, and the Eagles grabbed the board. Kerri Shields hit a pair to all but ice the game with 20.7 seconds to play. Mason would hit a put-back with 3.6 seconds left, but Clemson’s final foul came with just 0.3 on the clock.