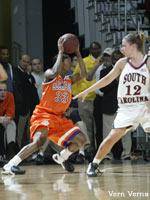 Anderson, SC-Senior junior college transfers Leah Roper and Tabitha Vasilas both recorded career high scoring totals in reserve roles to lead Clemson to an 84-56 victory over High Point on Tuesday night in women’s college basketball action at The Civic Center of Anderson, SC. The Lady Tigers improved to 5-2 with the victory, while High Point fell to 6-4.

Clemson will now travel to the Sun Splash Shootout in Nassau, Bahamas for games on Saturday (vs. Marshall) and Sunday (vs. Oakland or Mississippi). Clemson will not return to The Civic Center of Anderson until January 2 when the Lady Tigers open conference play against Virginia.

Roper had scored just 31 points all year and had not scored more than six points in a game over the first six games of the season. But, the senior forward/guard scored 21 points in just 18 minutes in leading the Lady Tigers in scoring for the first time in her career. Roper connected on 6-10 field goals and a career-best 9-12 free throws. She also added seven rebounds in the all-around performance.

Julie Aderhold was the only other double digit scorer for the Lady Tigers, as she added 10 points. Amanda White scored seven, but had a game-high 10 rebounds. Chrissy Floyd scored nine, her first game all year out of double figures, but she contributed six rebounds, three assists and three steals.

High Point was led by 5-1 point guard Cebronica Scott, who had 12 points, double her season average. Narelle Henry added 10 points and four steals, while Kate Jenner scored eight, all from the foul line. Gina Rosser had just two points, but had five steals in just 20 minutes.

Clemson dominated the backboards and that had a lot to do with the Lady Tiger victory. Clemson won the rebounding 56-32, the school’s top rebound margin in over four years. Clemson had a 20-2 advantage in second-chance points. Both teams hit exactly 17-28 from the foul line, but Clemson held High Point to just 31 percent from the field. The Lady Tigers forced 22 turnovers thanks to 13 steals.

Clemson struggled from the field in the early going and the lead changed hands five times in the first half. The Lady Tigers held a 38-27 lead at intermission thanks to 10 points apiece from Vasilas and Roper. The advantage was still just 12 points at the 14-minute mark before Clemson got its offense in gear.