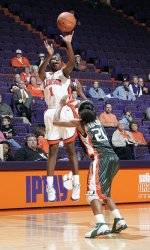 CLEMSON, SC – Clemson was defeated by Miami, 74-52, in women’s basketball action from Littlejohn Coliseum on Thursday. With the loss, the Lady Tigers fell to 7-10 overall and 1-2 against ACC opponents, while the Hurricanes improved to 12-3 overall with a 2-1 record in conference play.

Melissa Knight led all scorers with 23 points for Miami, while ACC scoring leader Tamara James totaled 22 for the night. The Hurricanes shot 41.7% from the field and scored 27 points off of 27 Clemson turnovers.

Maxienne White led the Lady Tigers with 16 points on 7-15 shooting in 29 minutes of play. The sophomore from Pensacola, FL also collected a team-best nine rebounds in the game. Point guard Tasha Taylor handed out eight assists to improve her ACC-leading assist per game ratio to 6.35.

The Lady Tigers and Hurricanes played a tough first half in which the score was tied on five occasions and the lead changed six times. Amanda Frist scored the first points of the game with a basket in the first minute, but the score remained close throughout the period, with neither team leading by more than three points.

A three-pointer by White with under 10 seconds remaining in the half gave Clemson a one-point lead at the break (27-26).

The Lady Tigers hit two quick field goals to take a five-point lead in the second half. However, the Hurricanes responded and went ahead at 36-35. Clemson kept the score close for the first five minutes of the period and led 40-38 at the 15:04 mark. After a Taylor free throw, Miami went on a 17-0 scoring run to take a commanding, 55-41, lead over the next eight minutes from which the Lady Tigers never recovered.

The Hurricanes went on to post their 12th victory of the season by a 74-52 margin.

The Clemson squad will return to action on Sunday, Jan. 15 against the Wake Forest Demon Deacons. The teams will take to the court at 3:00 PM.