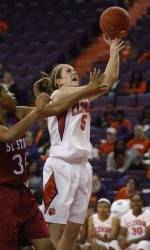 GREENSBORO, NC – Clemson pared a 13-point second-half deficit down to three, but couldn’t close out the comeback on the road at North Carolina A&T on Monday night. The Aggies (3-2) hit 12-15 from the line in the second half and the Lady Tigers battled foul trouble throughout as A&T held on for the 76-66 win over the Lady Tigers, who fell to 2-2 on the season.

Freshman Nikki Dixon scored 19 points (8-11 FG, 1-3 3FG, 2-8 FT), including three straight Clemson hoops in cutting A&T’s lead down to 62-59 with 3:08 to play in the game. The Aggies outscored the Tigers 14-7 the rest of the way, hitting four field goals and seven free throws in the final 3:25 after being held scoreless for nearly five minutes.

Freshman Kelly Gramlich earned her first career start for Clemson, and played 39-plus minutes, scoring 10 points, grabbing five rebounds and three assists with just one turnover. Her right-wing three with 2:31 to play kept Clemson in striking distance, negating a three on the other end just seconds before.

The game again had Clemson’s youth on display, as freshmen played 115 of 200 minutes, scoring 40 points. Combined with the sophomores, The underclassmen played 154 minutes total, scoring all but 13 points, as Shaniqua Pauldo had ten points on 3-9 shooting and a 4-4 mark from the line.

Free throws made a big difference for Clemson, who hit just 11 of 19 attempts in the second half. Foul trouble dictated much of Clemson’s play, as four players finished with four or more fouls, including three starters. The Aggies made 21 of 30 attempts (70 percent) for the game, and were 12-15 (80 percent) in the second frame.

The Aggies took a 35-26 lead into halftime, outscoring Clemson 11-0 over the final 3:43 of the half as the the Lady Tigers began to go down with foul trouble, as four players committed two or more fouls in the half, with Dunn and Dixon picking up three apiece.

NC A&T was able to take advantage at the line, hitting 9-15 from the stripe. In the early going, the Aggies held a four-point lead before Clemson stormed back to take a 17-13 lead, holding the Aggies without a field goal for 6:38 during the frame.

A&T came out of the break hot, forcing Clemson into a timeout just 1:24 into the half after taking a 40-29 lead. Clemson kept threatening, getting within ten, and shaved the lead down to three on Dixon’s layup with 3:48 to play on the fast break. But the Aggies were able to stay afloat, keeping a small margin, and getting big hoops down the stretch from several players to hang on for the win.

Clemson returns to action after the Thanksgiving break with a showdown at Furman on Nov. 28 in Greenville, SC.