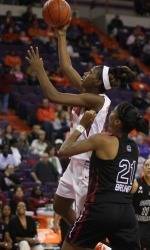 PROVIDENCE, RI – The Clemson Lady Tigers fell just short of a big comeback at Providence College on Thursday. Clemson (4-6) fell by a 73-63 count at Alumni Hall, despite shaving a 14-point Friar lead down to four with eight minutes to play. Shaniqua Pauldo had 20 points off the bench to lead all players, while Nikki Dixon had 13 and Quinyotta Pettaway had 10, all in the second half.

Clemson had 13 offensive rebounds in the second half, converting for 11 points, and had a season-low 13 turnovers in the game, but Providence’s overall rebounding advantage stunted several runs, and kept possessions alive for the Friars (6-6).

The Lady Tigers hit .406 percent of their shots in the game, but the 46-37 rebound deficit was enough to keep Providence ahead.

Pauldo had ten points in each half, and had her 11th career game of 20-plus points, and the third of this season, upping her scoring average to 11.7 per game. Pettaway was Clemson’s leading rebounder with seven in the contest, while Pauldo had six, including four on the offensive end.

Providence’s control of the glass dictated the pace of the first half, as the Friars scored 17 second chance points in the frame, and outrebounded Clemson 24-12, including 14 offensive rebounds.

Shaniqua Pauldo kept the Lady Tigers afloat with ten points in the half, and was the only Tiger to score for a nine-minute period of the first half. Clemson was relatively efficient offensively, hitting .481 from the field on 13-27 shooting, while holding the Friars to a .412 mark. Gramlich hit both of her three-point attempts in the half, and Dixon had eight as well.

The Friars stretched the lead to as many as 14 early in the second half at 48-34 with 18:24 to play, but Clemson continued to fight back. Pauldo cut the lead to four with a put-back and foul off a Dixon missed free throw, a big four-point possession for the Tigers with 8:38 to play.

Providence responded with a key basket, but Clemson could get no closer than five the rest of the way.

Clemson will take eight days off from competition during the holiday, and will resume play on Dec. 30 against UAB in Littlejohn in the final tuneup before the Lady Tigers get into ACC play.