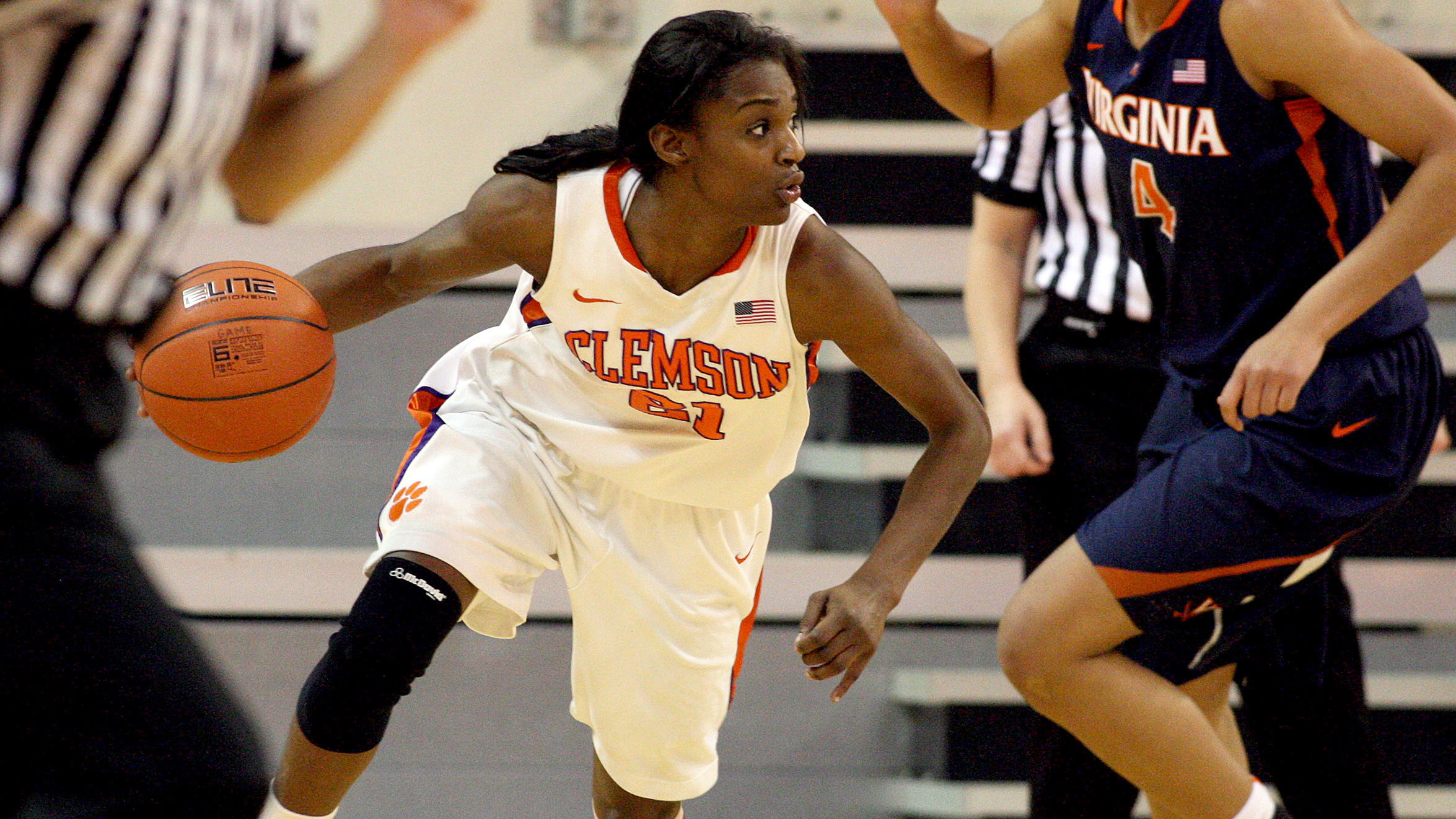 CLEMSON, SC – Nikki Dixon‘s game-winning three-pointer with 34.4 seconds to play gave Clemson the push they needed to hold on for a 64-62 win over Virginia (15-11, 7-8 ACC) in Littlejohn on Thursday night. The Lady Tigers (8-18, 4-11 ACC) won their second straight ACC home game, overcoming 11-point deficits in each contest.

Clemson trailed, 55-44, with 10:00 minutes left and 62-54 with 2:15 to play in coming back for the win. The Cavaliers entered the game on the NCAA Tournament bubble, boasting an RPI of 68th nationally.

“Virginia is a good team. I know they’ve been battling with some injuries, and that’s been our story the whole season,” said Itoro Coleman, who got the win on her birthday. “Coming into the game, we knew that number one, we had to defend. We also knew that we had to attack their zone.”

When it mattered, Clemson did exactly that, as the Cavaliers went 1-5 with two turnovers over the final four minutes, while Clemson overcame an eight-point deficit in the last 2:15.

Dixon, who drilled three left-wing three-pointers in the second half, took a swing pass from Aisha Turner and drilled the shot to give Clemson a 63-62 lead with 34.4 second left.

“My heart just stopped,” said Dixon, who finished with nine points, a career-high seven assists, five rebounds, three steals, and two blocks. “I got a good look and I made it. I stayed with it and knocked it down.”

The Tigers scored nine points apiece in Dixon, Turner, and Kelly Gramlich, who tied a season-high with three three-pointers made. Turner, who is second among all league freshmen in assists at 3.4 per game had six to go with four offensive rebounds, and three steals. Nyilah Jamison-Myers also had eight points on 4-4 shooting in 17 minutes.

Clemson improved to 7-4 this season when shooting .400 or better, as they knocked in 25-53 (.472) from the floor, and .500 in the second half. Virginia hit 22 of their 44 attempts, but Clemson’s control of the boards prevented the Cavs from keeping possessions alive.

The first half was tight most of the way, with four ties and three lead changes. Clemson led, 20-14 before a 13-3 Virginia run gave the Cavaliers a lead they would not relinquish for more than 20 minutes, until Dixon’s shot. Trailing by just two points, Virginia’s Jazmin Pitts scored a hoop and drew the foul to give the Cavs a 32-27 lead going into halftime.

In the second half, each time it looked like Clemson might make a run, Virginia had an answer. With 6:43 left, Ford hit a shot to pull Clemson within three, before the Cavs against stretched the lead to eight moments later. Turner answered with a jumper, but Sarah Imovbioh against hit a layup with 2:43 left to give UVa the 62-54 lead. However, those would be the last points for the Cavaliers.

Dixon hit a three with 2:15 left to knock the deficit to five and two possessions later, Ford hit a layup and was fouled with 1:18 to play. Imovbioh then missed both of her free throws, got the rebound, but missed the follow. Clemson came down the other end and Gramlich launched a three which bounced out, but Dixon tracked down to keep the possession alive.

Out of a timeout, Dixon found herself alone on the left wing and drilled the shot to give Clemson the 63-62 lead. China Crosby then traveled on the other end giving the ball back to the Tigers. UVa had to foul four consecutive times to get into the bonus, sending Turner to the line. Turner calmly sank the first before missing the second. Virginia took down the rebound and pushed it down the other end.

The ball went out underneath the hoop with 0.7 seconds to play. They found Barnette, whose shot sailed long to clinch the win for the Lady Tigers.

Clemson plays the next two on the road, at Boston College on Sunday, and at Georgia Tech next Thursday.