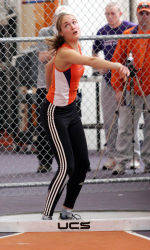 Clemson, SC – The women’s track & field team won the Clemson Invitational on Saturday at the Rock Norman Outdoor Complex. Despite cold, windy conditions, the Lady Tigers prevailed as a team with 79.5 points. Western Carolina was runner-up with 49. Clemson posted a regional-qualifying mark in the high hurdles and won seven event titles Saturday.

Polly Hardy won the 100m high hurdles with another regional-qualifying time. The Anderson, SC native ran a 13.85 and has done well this season in the hurdles for Clemson. Krystal Barringer was second (14.13), while Golladay placed fourth (14.68) with a season-best performance. Sierra Hill was runner-up in the 400m hurdles at 1:03.05.

Anni Korhonen. Beth Jordan and Caroline Kennedy tied for third in the pole vault with clearances of 11’11.75″. It matched Jordan’s season-best and was an outdoor best for Kennedy, a freshman from Orlando, FL. That mark is listed fifth in school history.

Della Clark was unable to earn a distance due to fouls. Kokayko won easily over Adrianne Alexander of Appalachian State, who threw 148’2″. Catheryne Porter was sixth at 139’11”. She also competed in the discus, finishing third with a throw of 130’1″.

Weber claimed the javelin throw with a mark of 139’4″. She held off teammate Bethanie Wachna, whose best throw was a 137’4″ toss. Kokayko also competed in that event for the first time in her collegiate career. In the shot put, Wachna was third with a throw of 37’7.25″.

The Lady Tigers return to action next Saturday (April 14) to host the Solid Orange Classic, which will serve as a final tune-up for the ACC Championships on April 19-21.