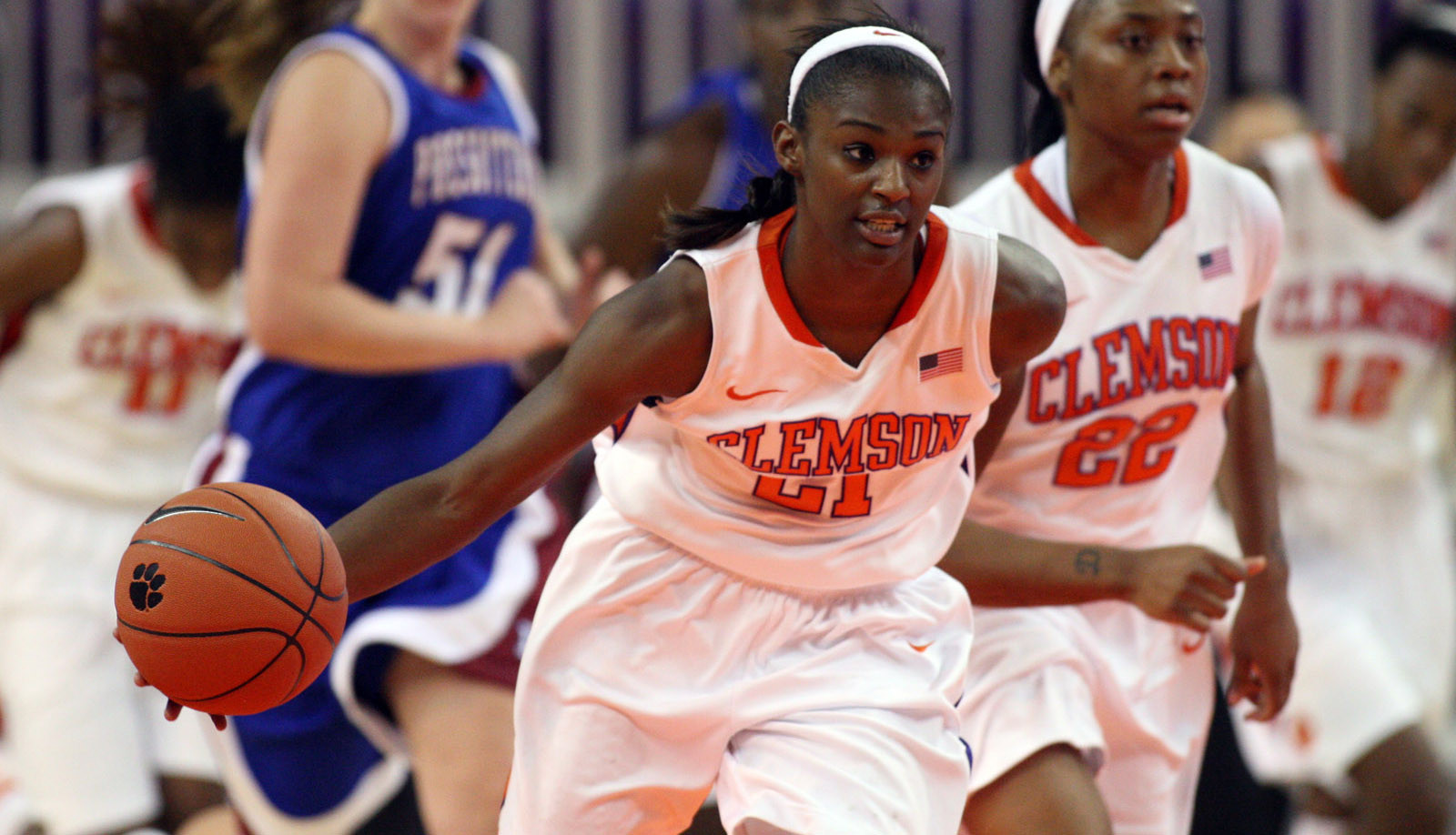 BLOOMINGTON, IN – Clemson held an eight-point second half lead, but went cold for an eight-minute stretch of the second half, as Indiana (6-1) came back to beat the Lady Tigers (0-6), 52-49 in Assembly Hall in the ACC/Big Ten Challenge. Nikki Dixon had 14 points and nine rebounds, and Danaejah Grant added 12 points and nine rebounds for the Tigers.

Clemson fell to 2-4 all-time in the Challenge, and had this one slip away late after leading at the half for the first time this season. The Tigers exercised strong ball control, committing just 13 turnovers in the game while forcing 16, and converting that for 12 points. Clemson did score 22 points in the paint and 12 second chance points, but the offense stalled midway through the second half, sending Indiana on a 10-0 run.

Clemson outrebounded the Hoosiers, 53-49, but had ten shots blocked on the way to .247 shooting in the game. The Tigers held Indiana to season-low 52 points and .309 shooting and .276 in the second half, but couldn’t hang on.

Dixon and Grant also added three steals apiece, while Grant had three assists and Dixon two. Jonquel Jones had seven points, all in the first half, and ten rebounds, her third game of the season in double-figures. Quinyotta Pettaway also added ten rebounds in 23 minutes to go along with four points.

Aulani Sinclair, who entered the game averaging 19.8 points per game, scored 23, but had just five in the second half. Quaneisha McCurty had six blocks in 18 minutes, and was clearly a factor in Clemson’s struggles around the rim.

The Tigers played well in the first half, taking a lead by as many as ten at 26-16 after an 11-4 run capped by a Nyilah Jamison-Myers hoop from Aisha Turner with 5:10 to play.

Clemson spread the ball around in the half, with Dixon scoring eight to lead the Tigers, Jones added seven, including a three-pointer, and Turner had five. Clemson committed just four turnovers in the half, and scored 14 of their points in the paint, six off turnovers, and seven second chance points.

The Tigers opened up a 42-34 lead on a Dixon layup with 11:53 to play. The Hoosiers would hold Clemson without a point for the next eight minutes, taking a 44-42 lead. The teams traded a free throw each before Grant cleaned up a Turner miss to tie it at 45-45 with 2:56 to play.

Indiana responded with a tough jumper from Jasmine McGhee, and hit a free throw to go up three moments later. After a couple of empty possessions, Sinclair hit a pair of free throws with 1:02 to play to take a five point lead. Grant buried a corner three to bring Clemson back to within two with 25.2 to play, but the Tigers weren’t able to foul, as Indiana hit a layup at the other end to take a four point edge.

Dixon went to the line with 0.8 seconds to play and made the first to pull within 52-49, and intentionally missed the second, which fell into Indiana’s possession to seal the win.

Clemson will return to Littlejohn Coliseum on Sunday, Dec. 2 when they take on Jacksonville at 2:00 pm. Clemson has played four straight away from home.