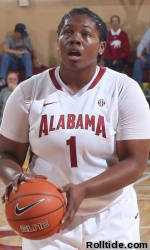 Head women’s basketball coach Itoro Coleman announced the signing of Aneesah Daniels to a Financial Aid Agreement on Friday. Daniels spent her freshman season at Alabama, where she averaged 5.8 points and 5.0 rebounds for the Crimson Tide. Daniels will sit out the 2012-13 season due to transfer rules, but is able to practice with the team upon enrollment and will have three seasons of playing eligibility.

“We are very excited to have Aneesah as a member of the Lady Tiger family,” said Coleman. “She is a strong post player with the ability to post on the block, as well as, take you off the dribble with her quick first step. With Aneesah’s experience and versatility, she will have an immediate impact in practice.”

Daniels, a six-foot power forward, was a top-100 player nationally by two scouting services in the 2011 class. Dan Olson Collegiate Recruiting Report ranked her as the 69th-best player in the 2011 class, while ESPN Hoopgurlz had her at 96th nationally, and the 29th-best post prospect.

Daniels attended Redan High School in Decatur, GA, where she was named to the All-State team, and won the AAAAA State title in her junior season, compiling a 30-1 record.