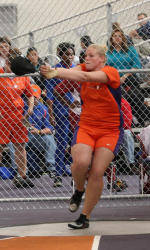 The Clemson women’s track & field team will host the Solid Orange Classic this weekend at the Rock Norman Outdoor Complex. The events get underway Friday afternoon with the hammer throw at 5:00 PM. Saturday’s competition begins at 10:00 AM with the pole vault and javelin throw. The Lady Tigers have posted regional-qualifying performances in four events this season, and hope to add to that number this weekend.

The first event on Friday will be the hammer throw and it will feature Della Clark, Ashley Robinson are expected to compete for Clemson in the steeplechase. The 5000m run will be held at 6:30, and competing for the Lady Tigers will be Lauren Marriott.

Saturday’s competition starts with the javelin at 10:00 AM. Rachel McLaurin and Krystal Woods are entered in the event for Clemson. Also at 10:00, Beth Jordan, Helen Kirkland, and Krissy Thompson will compete in the pole vault. At 11:00, the trials for the 100m hurdles will take place. Entering that event from Clemson are Renata Miyamoto. Also at that time, the long jump will feature Lady Tiger athletes Tonya Nwankwo, and Charmayne Smith.

The remainder of the field events will begin at 2:00. Felicia Hawthorne, and Anni Korhonen will enter the high jump. Clark and Allison Bradshaw are competing in the shot put. In the discus throw, Porter and Woods are set to compete. The triple jump will feature Barringer, Nwankwo, Smith, and Michelle Rogers.

At 2:30, six athletes from Clemson will compete in the 800m. Leading the way in that area this season have been Thea Dix and Patrice McMillan. The 400m hurdles will be held at 3:30 PM and will feature Hardy, Perry, and Sobanjo. At 4:00, Hardy, Hill, and Hinton will compete in the 200m dash for the Lady Tigers. The final event for the women will be at approximately 4:30, the 4x400m relay. Clemson will enter two teams in that event.