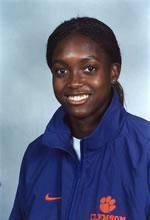 Clemson, SC – The Lady Tiger track & field team scored 280 points and finished first in the team totals at the Clemson Invitational. A total of three athletes posted regional-qualifying marks on Saturday, including two throwers from Clemson.

Woods claimed the event title in the javelin throw after posted a mark of 134’8″ in the finals of that event. It was her first event title this season. Rochelle Kokayko and Rachel McLaurin also competed in that event for Clemson. Freshman thrower Kokayko was ninth with a throw of 89’0″, while McLaurin was 10th at 79’5.5″.

The Lady Tigers return to action on Saturday, April 15 to host the Solid Orange Classic at the Rock Norman Track & Field Complex.