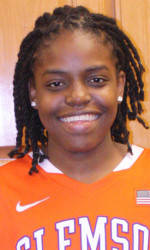 Clemson women’s basketball signee Jonquel Jones has been selected by the Women’s Basketball Coaches Association (WBCA) as one of 20 players nationally to participate in the 2012 WBCA High School All-America Game presented by NIKE. The 21st annual All-America game will be played on March 31, 2012 at the Pepsi Center in Denver, CO, the site of the 2012 NCAA Women’s Basketball Final Four. “We are very excited for Jonquel on her selection,” said head coach Itoro Coleman, whose 2012 signing class is ranked among the top-20 nationally.  “She will be an excellent ambassador for the Lady Tiger program at the All-America game, and we can’t wait to have her in orange.”Jones plays at Riverdale Baptist in Upper Marlboro, MD, ranked as the second-best high school team in the country in the ESPN/ Powerade Fab 50. The 6-3 combo guard is ranked as the 36th-best player overall in the 2012 class by ESPN Hoopgurlz. Jones is also a McDonald’s All-America nominee, and should learn about a selection in the next few days for that game, which is held in Chicago this year.