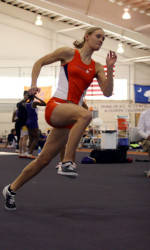 The Lady Tiger multi-event area has received a major boost at mid-season from a pair of Germans in Linda Buchholz and Liane Weber. Both newcomers posted NCAA provisional qualifying marks while eclipsing the previous school record in the pentathlon. The record of 3,676 points by Lauren Nicholson had stood since 2004. Weber finished second among 12 athletes Friday, while Buchholz was fourth overall. Weber was the top collegiate finisher.

Buchholz’ highlight came in the high jump, where she posted the third-best mark in school history in the indoor event. She cleared 5’7.75″, by far the best mark on the team so far this season and best since Katie Pickett did so in 2004. She also had a second-place showing in the long jump (19’3.25″) and third-place effort in the shot put (39’4″).