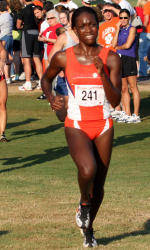 Clemson will take a full squad to Paladin country on Saturday, led by senior Patrice McMillan. She finished 14th and was Clemson’s #2 scorer in this event a year ago. McMillan did not compete in the Lady Tigers’ last event, which was at Gardner-Webb last weekend. She and Sunday Ford, a sophomore, did not travel for resting purposes. Ford has been one of the team’s top runners this season as well.

Laura Laughlin has had an immediate impact for the Lady Tigers this season, as the sophomore has been the team’s top finisher in the last three meets. She had a career-best sixth-place finish last Friday at the Gardner-Webb Duals.

A pair of freshmen have also performed well for Clemson this season in Maggie Bernard and Lauren Klas. A native of Charlotte, NC, Bernard scored in the Lou Onesty Invitational in Earlysville, VA and most recently at the Great American Cross Country Festival in Hoover, AL. Klas has scored in three of the Lady Tigers’ four meets this season, including each of the last two.

Thea Dix was Clemson’s #2 runner a week ago, and she will make the trip this weekend as well. Also traveling for Clemson for Saturday’s event will be Lauren Marriott, Ashley Vaughn, and Anastasia Wilson.

This will be the team’s last test before heading to Earlysville, VA for the ACC Championships in two weeks.