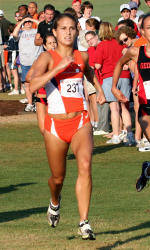 The Clemson women’s cross country team travels to Tallahassee, FL to compete in the ACC Championships on Monday. The 6K event will take place at 9:30 AM at Miccosukee Greenway. Last season, the Lady Tigers finished ninth overall. This year, Clemson has competed in four events, notching one win, two third-place finishes, and a fifth-place finish. The fifth-place showing actually took place at the Pre-ACC event run on the same course that will serve as the venue for Monday’s championship.

Jennifer Barton has been the top runner all season for Clemson. The senior from Toledo, OH was named ACC Performer of the Week on October 10 and has three top 10 finishes in four events this year. She is joined by Casey Phillips, who has three top 20 finishes.

Also traveling this weekend will be Thea Dix and Patrice McMillan, who run middle distance for Clemson during track season.

Four freshmen round out the lineup for head coach Larry Clark. Leading the way has been Ashley Robinson, who has scored in each of the last three meets for Clemson. Elizabeth Embler finished 39th in the Furman Invitational and will also make the trip. Sunday Ford scored in the first three events of the season for the Lady Tigers, while Candice Johnson counted toward Clemson’s winning score in the season-opening Gamecock Invitational.