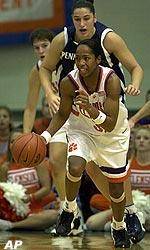 Lady Tiger Basketball To Play Host To The Lady Paladins

CLEMSON, SC – The Clemson women’s basketball team will play host to the Furman Lady Paladins Saturday, Dec. 14, 2002, at 4:00 PM at the Civic Center of Anderson in Anderson, SC.

The Lady Paladins are coached by Dr. Sam Dixon, who served as associate head coach for the Lady Tigers from 2000-02.

Also on Furman’s bench is new Lady Paladin Assistant Coach Marci Glenney. Glenney played at Clemson from 2000-02, earning third-team All-ACC honors as a senior last season. She helped lead the 2001-02 Lady Tigers to a 17-12 overall record and a 9-7 mark in league play.

Clemson holds a 11-1 advantage in the series with Furman. Last season, the Lady Paladins won their first game over the Lady Tigers, 59-57, in Timmons Arena.

Clemson enters the game with an overall record of 3-2. Most recently, the Lady Tigers were defeated by 11th-ranked Penn State, 80-66.

With 11:08 remaining in the first half of Clemson’s loss to Penn State on Dec. 7, Lady Tiger senior Chrissy Floyd hit a three-pointer that put her over the 1,500-point mark in all-time scoring at Clemson. Floyd went on to score 24 points in the contest, moving her career point total to 1,518, good enough for fourth place all-time. She is on schedule to finish her career as Clemson’s second all-time leading scorer, trailing only Barbara Kennedy.

Floyd leads the Lady Tigers in scoring, averaging 17.2 points per game. Amanda White leads the team in rebounding with an 8.6 rebounds-per-game average.

Furman enters the game with an overall record of 2-4. The team is led in scoring and rebounding by Deshara Shealey, who is averaging 13.8 points per game and 7.5 rebounds per game.