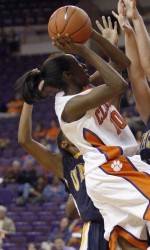 CLEMSON, SC – The Clemson women’s basketball team will travel to Columbia, SC for a Thursday game at 7:00 pm with South Carolina (1-1). The Tigers (2-0) will try to move to 3-0, which would be the best start for the program since 1998-99, Head Coach Itoro Coleman’s senior season.

The game will be televised live on Fox Sports South, and will be on Clemson Tigers Sports Network following Tiger Calls.

Clemson is coming off of wins over UNC Greensboro and Charleston Southern, but this will be a true road test for the Tigers. Coleman will not be in attendance as she continues her maternity leave. She hopes to return by the end of November.

Quick Clemson Notes  Head Coach Itoro Coleman will likely miss the next two games, but is aiming for a late-November return  Karleen Thompson is the acting Head Coach during the leave of absence, but Coleman is the coach of record  Coleman is in her first season as a head coach. The 2000 graduate of Clemson was most recently at Penn State  The Tigers are looking for their first 3-0 start since 1998-99, Coleman’s senior season  Clemson has won two in a row over the Gamecocks, and five of the last seven matchups in Columbia  The Tiger guards (Smith, Thomas, Wright, Shelton) combined for 55 points, 20 rebounds, 12 steals, and 11 assists in the win over CSU  Clemson’s three main post players (Pauldo, Tate, Mason) combined for 45 points, 27 rebounds, 5 blocks, 0 turnovers on 20-35 shooting in the first game.  Tiger wing player Sthefany Thomas had 16 and 18 points in the first two games, giving her double-figures in seven of the last eight games, dating back to last season. She also had a career-high five assists against UNCG  Shaniqua Pauldo put up career highs of 26 points and 15 rebounds for her first career double-double against UNCG  Kirstyn Wright’s 29 points against Charleston Southern is tied for the most by any ACC player this season and was the most points by any Clemson player since the 2008-09 season (Lele Hardy – 32 – 11/22/08)  Clemson opens with seven of their first eight games at home for only the 2nd time in school history (1982-83)  Clemson is now 25-11 all-time in season openers after the win against UNCG