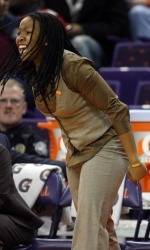 “I’m excited about this class,” said Itoro Coleman. “We felt our 2011 class was a strong class. When we came in, we were already late in the game. For us to get the players we were able to get was huge. Coach Yo did a great job of spearheading that. These kids have a chance to come in and play right away, and I’m looking forward to getting out there with them.”

Assistant Coach and Recruiting Coordinator Yolett McPhee-McCuin, a key organizer of the group, said, “This shows that people are understanding the vision that Coach Coleman put in place and they [prospects] have the opportunity to be a trailblazer and bring the program back to prominence that coach was a part of when she played here.”

The 2011 class included four players in the early period, headlined by Holly Springs (NC) post player Natiece Ford, who is ranked as the sixth-best post prospect nationally, and the 47th-ranked player overall regardless of position. Deja Hawkins, a three-star prospect from Riverdale Baptist (MD) signed in April, bringing the class total to five.

“When we first arrived here, we quickly found out that many people were unaware with Clemson as far as Women’s Basketball’s concerned,” said `Coach Yo.’ “Since then, we’ve had hundreds of kids in on campus to see what we’re about. We’ve been getting a great response, which has a lot to do with the staff. Coach’s first goal was to make the community aware of the vision, which embodies academic and athletic success.”

The ranking begins to quantify the changes in store for the Lady Tiger program, which Coleman took over for the 2010-11 season. She and her staff have been on the trail relentlessly, and the ranking of 30th out of 333 Division I programs is the type of boost they are looking for in recruiting circles.

“We feel good about the direction that we are headed in as far as recruiting is concerned,” said Coach Yo. “We pride ourselves in being one of the hardest-working staffs in the country. But, we still have a lot of work to do. What the ranking does is allow us to see that we are headed in the right direction.”

“Know that we are headed in the right direction,” said Coleman. “At Clemson, you have the best of both worlds with a top-23 school academically and terrific facilities athletically. We have a great facility, support, location, and coaches. Everything is there to be successful.”