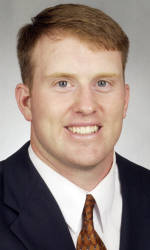 Clemson, SC — Kyle Young has been named an assistant athletic director in the Clemson Athletic Department. The announcement was made Friday by Athletic Director Dr. Terry Don Phillips. Young will assume many of the responsibilities previously held by Senior Associate Athletic Director Dwight Rainey, who will retire after 32 years at Clemson on August 1.

“First, I want to publicly thank Dwight Rainey for his distinguished service to this department since 1975,” said Phillips, who has worked with Rainey since he became Clemson Athletic Director on July 1, 2002. “Dwight has had such a positive impact on this program in so many areas dating to his first position as an assistant basketball coach under Bill Foster. He has been a trusted co-worker and adviser in my first five years at Clemson.”

Young will be involved in many aspects of athletic administration, including sports supervision, budgetary items, and summer camps. He will also assist Phillips with the football scheduling.

Young, a native of Clemson, first came to the school as a freshman in 1997. He ranks among the top student-athletes in Clemson history. He is the only three-time first-team Academic All-American in any sport in Clemson history. He is also one of just two ACC football players and one of just two offensive linemen in college football history to be a three-time first-team selection.

Young was two-time All-American on the field (2000 and 2001). As the starting center for the Tigers he was a finalist for the Dave Rimington Award in 2000 and 2001 (top center). Young helped the Tigers to three bowl games in Tommy Bowden’s first three years, including the 2000 season when Clemson finished 14th in the final USA Today poll with a 9-3 record. Young provided many of the holes that Woodrow Dantzler ran through to establish Clemson and national records as the starting quarterback in 2000 and 2001.

In 2001 Young became the first Clemson football student-athlete in 23 years to win an NCAA Football Foundation Scholar Athlete Award. He was honored in New York City in December 2001, the same night Terry Kinard was inducted into the College Football Hall of Fame.

Young graduated from Clemson in May of 2001 and played his senior year as a graduate student. He worked in administration at Virginia Tech during the 2002-03 academic year, then returned to Clemson to serve as a graduate assistant football coach under Tommy Bowden’s in 2003 and 2004. He earned a Master’s degree from Clemson in educational leadership in 2003. He also began work on a Doctorate degree during that time and only needs to complete his dissertation to complete that degree.

Young began his work in the Clemson Athletic Department as an administrator under Dwight Rainey and Dr. Phillips in 2005.

“Kyle Young distinguished himself as one of Clemson’s top student-athletes during his playing days,” said Dr. Phillips. “He has gained considerable experience the last couple of years in athletic administration learning under one of the best in Dwight Rainey. He has a bright future in this profession.”

Young is married to the former Jamie Watson. They have one son, Watson, and another child who is due in October.