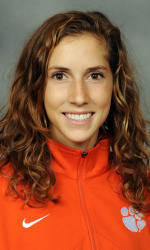 CLEMSON, SC – Six members of the Clemson cross country program, including four from the women’s team, were named to the All-ACC Academic Team for 2011. The teams were released Tuesday by the Atlantic Coast Conference. Natalie Anthony, Elyse Borisko, Alyssa Kulik and Kim Ruck were named to the women’s All-Academic Team, while Ty McCormack and Jonathan Sunde represented the Tiger men’s program.

Ruck, a native of Greer, SC, was named All-ACC Academic for the fourth straight fall season. She earned her undergraduate degree in health science last May, and is Clemson’s first four-time selection. Ruck was one of Clemson’s top performers on the course as well, earning all-region status for the third straight season.

Kulik, a modern languages major, earned the honor for a second straight cross country season. She was Clemson’s best runner in the fall, leading the Tigers individually in five consecutive meets to conclude the season. She was all-region for the second straight year with an eighth-place finish in Louisville, KY to finish out her career on a strong note.

Anthony and Borisko both earned the All-ACC Academic honor for the first time in their respective careers. Anthony showed great improvement over the course of the cross country season, finishing on a high note with a 27th-place effort at the NCAA Southeast Regionals in November. Borisko scored in four meets, including the ACC Championships in Clemson.

For the men’s team, McCormack earned All-ACC Academic honors for the second time in as many years with the program. The sophomore was all-conference and all-region in 2011, and is majoring in language & international trade. Sunde earned the honor for the third time in his career after rejoining the squad last fall. He scored in all five meets in which he competed in 2011. He is the first Clemson men’s runner to garner three All-ACC Academic Team selections.