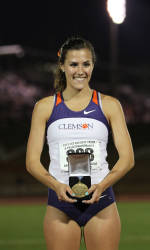 Clemson’s women have 37 points and stand in great position in third place with multiple qualifiers for Saturday finals. The men’s team is in eighth place heading into the final day of the meet, but like the women, also has a great deal of student-athletes competing in finals.

“The story of the night was Alyssa Kulik,” said Lawrence Johnson, Clemson’s Director of Track & Field. “I had a conversation last night with the girls about being complacent. I told the team it’s our championship to win or lose, and that it’s up to us as team to prove we are the best. Alyssa had that look in her eye last night, and led from pillar to post today. There was no doubt in anyone’s minds that she was going to be the champion. She really sparked the team going into tomorrow.”

Kulik jumped out in front of the pack in the steeplechase and never looked back, posting a time of 9:52.90, good enough to earn automatic qualification for the U.S. Olympic Trials later this summer. She beat her previous personal best, which came at the 2011 NCAA Championships in a fourth-place finish, by nearly five seconds Friday. With the win, she became Clemson’s first-ever winner in the women’s steeplechase.

“I wanted this so bad,” Kulik said. “I’ve medaled before, but I didn’t have a gold. So, this was nice to win in my final ACC meet! I felt really good tonight. I wanted to represent Clemson well, and it was awesome to be able to do it.”

Whitney Fountain earned her third career All-ACC certificate in as many tries in the multi-events. The red-shirt freshman from Bronx, NY earned the silver medal in the heptathlon with a total of 5,145 points. Her total was good enough to move her into eighth place in Clemson’s record books. It also marked the third straight season Clemson had at least one all-conference performer in the heptathlon.

“It was huge for Whitney to come in to her first collegiate heptathlon and score some heavy duty points for us,” Johnson said. “She can do more this year, too.”

April Sinkler was silver medalist in the long jump Friday with a leap of 20’5.75″. She had a consistent series in what was her 12th career all-conference accolade. She will vie for a final gold medal at the ACC Championships tomorrow in the high jump and triple jump.

A fourth all-conference winner Friday for the women’s team was sophomore Christy Gasparino in the pole vault. The school record-holder cleared the bar at 13’1.5″ and won the bronze medal. A pair of freshmen, Caroline Bond and Meghan Flanagan, scored in the event with clearances of 12’5.5″.

The Clemson women’s team went a perfect 5-for-5 in qualifying for Saturday finals in both the 200-meter dash and 100-meter hurdles. In all, the women’s team qualified 19 student-athletes for finals, while the men’s program produced 12 qualifiers for Saturday.

“That’s special,” Johnson said. “We have a heavy investment in the sprints, hurdles and jumps. We want to see that investment come to full fruition at meets like this. It’s good for our athletes to branch out and get it done in any sprint on the track.”

Dezerea Bryant, Jasmine Edgerson and Bridgette Owens all qualified for finals in both short sprints, the 100 and 200. Also moving on to Saturday’s final in the 100 was Monique Gracia, while Brianna Rollins and Marlena Wesh made it in the 200. Edgerson had the top time (11.44) in the 100, while Bryant (23.40) was fastest in the 200 trials.

Warren Fraser and Justin Murdock both qualified for finals in the men’s 100 and 200 dash events. Fraser posted a time of 10.34, a season-best, on Friday in the 100.

Wesh (53.33) led a group of three qualifiers in the women’s 400, including Nia Fluker and Brittany Pringley. In the men’s 400 dash, junior Jaron Roberson clocked a time of 47.74 and advanced to the final.

For the second straight outdoor season, the men’s 800-meter final will feature Chris Slate and Nathan Hendershot of the Clemson team. Both had season bests, Slate at 1:49.18 and Hendershot at 1:49.96.

Aaron Ramirez advanced in the men’s 1500 meters. He will compete in Saturday’s final scheduled for 1:50 PM. The Upstate native ran a time of 3:47.75 and was second in his heat, earning an automatic spot in the final.

Ty McCormack placed sixth in the men’s 3000-meter steeplechase final Friday evening. The sophomore out of Gainesville, GA had a time of 9:06.09.

Spencer Adams had the top preliminary time in the men’s 110 hurdles with a season-best 13.62, as he easily won the first of two heats. Marcus Maxey (13.82) was second place in the second heat to also advance to the final. Charlton Rolle was a third Tiger to make it on time.

Owens posted the top preliminary time (12.83) with a personal best in the 100 hurdles to lead five Tiger qualifiers in the event. Edgerson, Gracia, Rollins and freshman Keni Harrison will all compete in the final Saturday. Rollins won her heat in a time of 13.10 against a headwind.

Adams will attempt the double on Saturday after winning his heat in the 400 hurdles as well. He had a time of 52.33 in the prelims Friday. In the women’s 400 hurdles, Harrison posted one of the top five times in school history (57.43) and the top preliminary effort Friday. Sonni Austin will compete alongside her in the final on Saturday.

“For Spencer to make the finals in the 400 hurdles, which we didn’t do last year, was good,” Johnson said. “He ran really controlled and saved his best for tomorrow. I’m proud of the kid, he did a good job today.”

In other field event action Friday, Marcus Brown and Cory Thalheimer were fifth and sixth, respectively in the men’s shot put. Brown hit on a season-best throw of 56’9.5″, which is good enough for sixth in the Tiger record books. Thalheimer had a mark of 54’5.25″.

The competition concludes Saturday. Due to the threat of inclement weather, the field events have been moved to a 10:00 AM start, and the running events will begin at 11:30. Live video streaming will begin on TheACC.com at 11:30 as well.