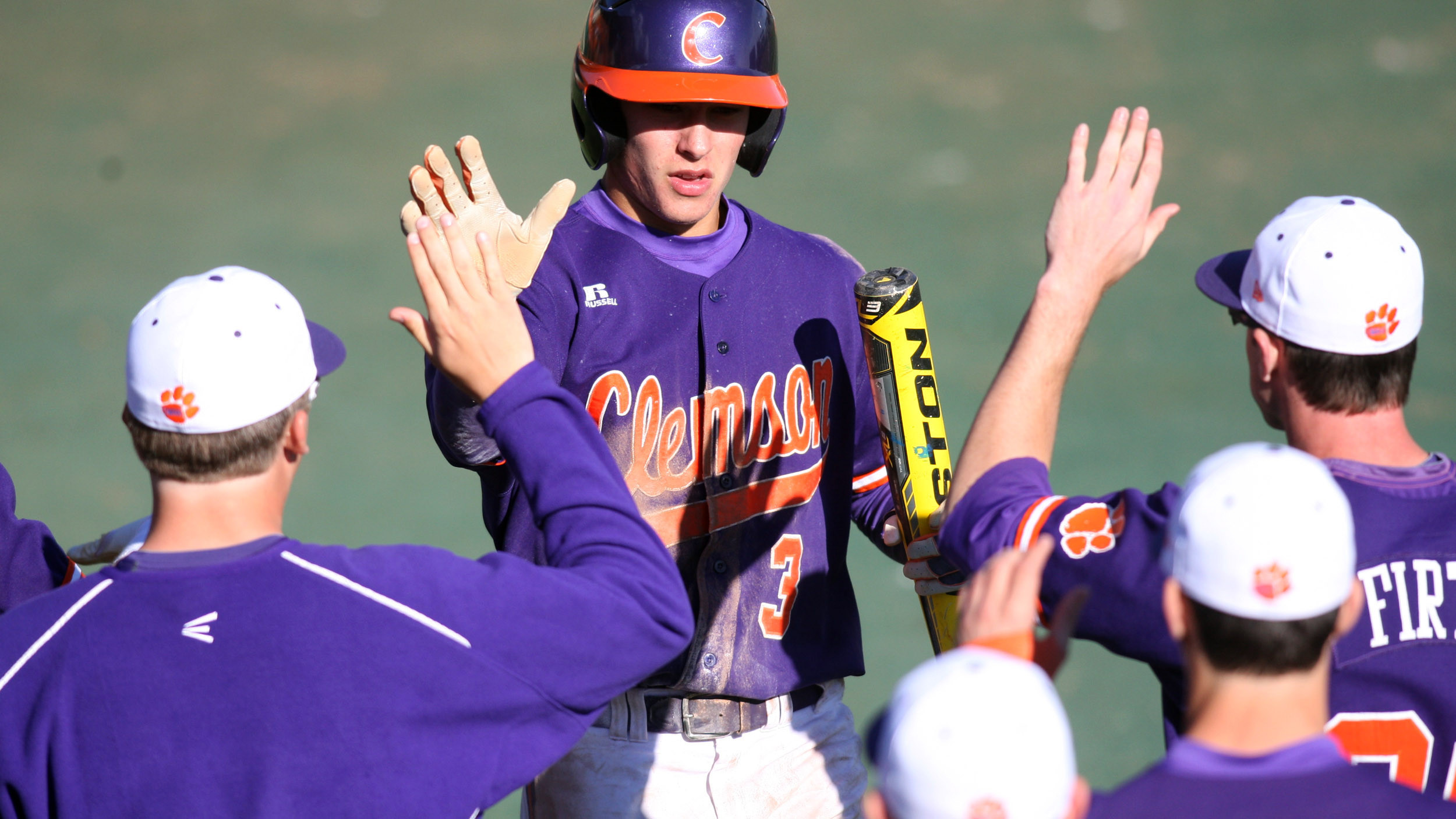 Freshman shortstop Tyler Krieger hit a triple and scored the tying run in the eighth inning, then on an 0-2 pitch with two outs in the ninth inning, he lined a walkoff single down the right-field line to give #17 Clemson a 5-4 win over Presbyterian College at Doug Kingsmore Stadium on Wednesday night.  The Tigers, who won their seventh game in a row, improved to 23-11 on the season, while the Blue Hose dropped to 18-16.

The Tigers led 3-1 before the Blue Hose scored two runs with the help of three Clemson errors in the sixth inning to tie the score, then Presbyterian College took the lead with a run in the seventh inning.  But Krieger led off the eighth inning with a triple and scored the tying run, then came through with the walkoff single in the ninth inning to cap a career night.  Krieger, who batted ninth in the lineup, went 4-for-5, as he had never tallied more than two hits in a game.

Chad Sanders (3-2), the third of four Blue Hose hurlers, suffered the loss. He gave up two hits, two runs, and one walk in 1.0 innings pitched.  Michael Ricchi pitched 3.0 scoreless innings of two-hit ball in relief to allow the Blue Hose to take the lead.  The four Presbyterian College pitchers combined to allow only five of Clemson’s 22 baserunners to score despite striking out just one batter in the game.

The Tigers took the game’s first lead in the first inning.  Tyler Slaton led off with a four-pitch walk and went to third two batters later on Garrett Boulware‘s one-out single to left field.  Shane Kennedy reached on a fielder’s choice as Boulware was retired at second and Slaton scored.

Steven Duggar led off the second inning with a single through the right side, but was erased at second on Jon McGibbon‘s fielder’s choice.  Joe Costigan and Krieger followed with singles to load the bases, then Slaton lofted a sacrifice fly to left field to score McGibbon.

Billy Motroni led off the top of the fifth inning with a double over the third-base bag and moved to third on Nate Chong’s sacrifice bunt.  Aaron Preston then grounded out to second to score Motroni.

Boulware led off the bottom of the fifth inning with a home run down the left-field line, his sixth long ball of the season.  Two batters later, Steve Wilkerson drew a one-out walk and went to third on Duggar’s single up the middle.  McGibbon walked to load the bases, but pinch-hitter Jay Baum grounded into an inning-ending double play to keep the Blue Hose within two runs.

The Blue Hose scored two runs in the sixth inning thanks in large part to three Tiger errors.  Brandon Paul led off with an infield single, moved to second on an error on a failed pickoff attempt, and advanced to third on Cam McRae’s sacrifice bunt.  Paul scored on Derek Long’s suicide squeeze bunt, while Long reached first on an error by Koerner on the play.  Ryan Hagan reached on a fielder’s choice as Long was retired at second, then Jay Lizanich belted a two-out triple to left-center to score Hagan.  Motroni ripped a 1-2 pitch to left field, but Slaton made a diving catch to keep the score tied.

Preston lined a one-out triple down the right-field line in the seventh inning and scored on Brad Zebedis’ sacrifice fly to center to give Presbyterian College a 4-3 lead.

Krieger led off the eighth inning with a triple to right-center on a 1-2 pitch and scored on a wild pitch to even the score 4-4.

Kennedy led off the ninth inning with a five-pitch walk and went to second when Morris balked before his first pitch of the game.  Wilkerson flied out to deep right field and Kennedy was indecisive on taking third and stayed on second.  But after the throw back to the infield, Motroni tried to hold his throw, but it slipped out of his hand and rolled through the infield, allowing Kennedy to advance to third base.  After Duggar and McGibbon were intentionally walked to load the bases with one out, Baum popped up in the infield for out #2.  But Krieger, who had already set a career high for hits with his triple in the previous frame, lined an 0-2 pitch down the right-field line for a single to score Kennedy for the winning run.

Along with Krieger’s four hits, the other freshman in the Tiger lineup, Duggar, went 3-for-4 with a walk and steal.  The two freshmen combined to go 7-for-9 with a walk and two steals to lead the Tigers, who outhit the Blue Hose 12-7 and overcame 14 runners left on base.

Paul and Lizanich had two hits apiece to pace Presbyterian College at the plate.