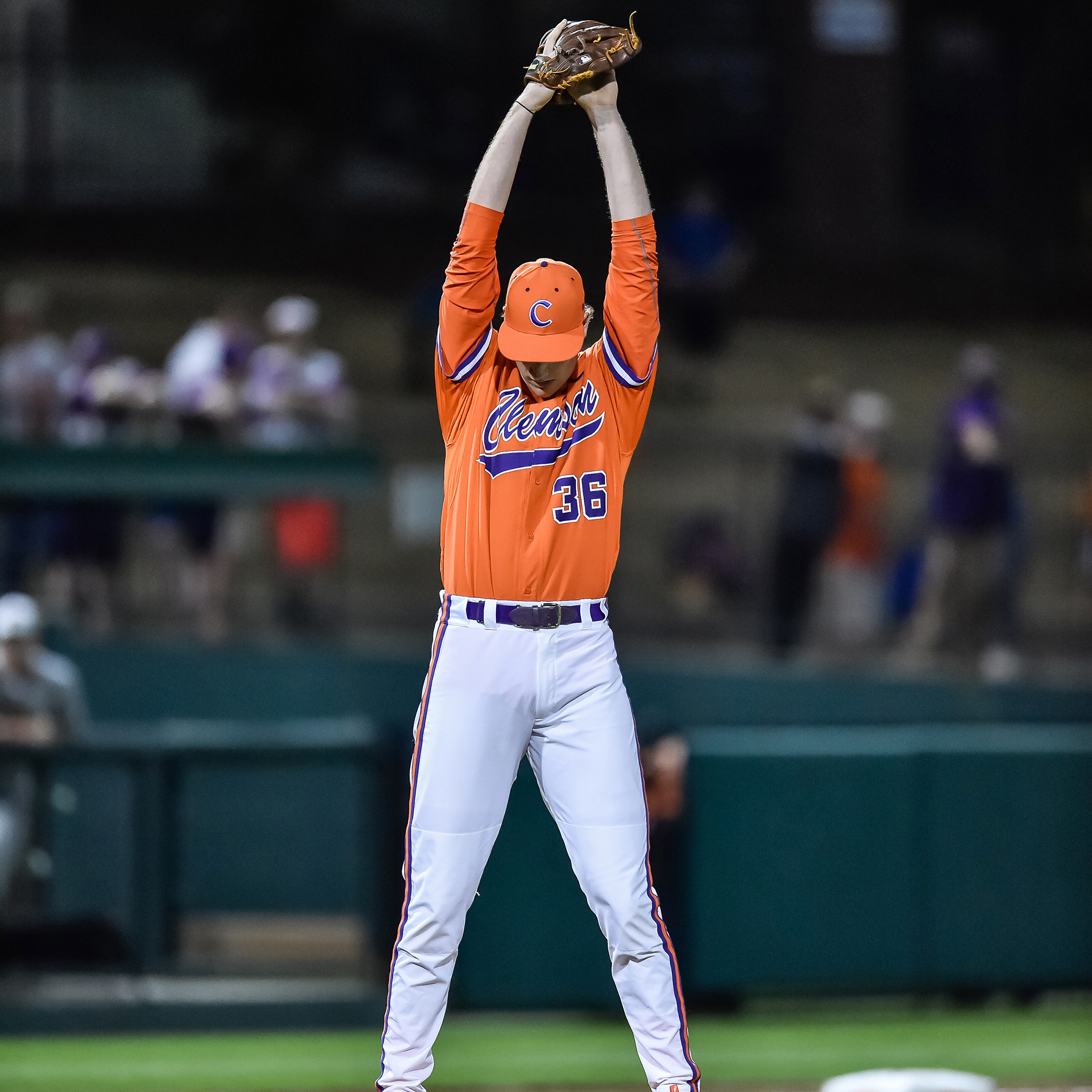 When Pat Krall is on the mound for the Tigers, the first thing you probably notice is his unorthodox delivery. Despite the fact that the 6’5” lefthander is one of the tallest players on the team, he adds to his height by stretching his hands straight over his head as he gets set before each pitch.

“That was something new when I got to Clemson,” admitted the Downingtown, Pa., native. “Two falls ago, my first fall here, I was not having a very good bullpen, so I started to joke around and throw my hands over my head. I thought ‘hey, why not take it a little more seriously and make it something unique and something to calm myself?’ So it stuck ever since and it’s kind of my thing.”

The delivery has worked for Krall this season, as he has a team-best 0.53 ERA and a 4-0 record in 33.2 innings pitched. Opponents are only hitting .174 against him, and he has 34 strikeouts compared to only five walks in his 13 relief appearances. Though he does not overpower hitters with his fastball, he has managed to shut down potent lineups like those of South Carolina and Pittsburgh.

“My whole life I’ve been a soft thrower,” he stated. “Especially for my size, people are expecting a lot. I’ve really used my control, deception and off-speed to get guys out. I’ll probably never be a power arm, but one of my strengths is that I know that and I’ll pitch to my strengths and not try to be someone I’m not.

“I didn’t think it was going to be something like this (his dominating season). “But you always have to prepare for doing something really special. I’m glad I prepared and it’s paying off, and I hope it continues to pay off.”

The Southpaw knows a thing or two about taking advantage of all the opportunities he is given, as his college career started off at a school that disbanded its baseball team after his freshman year in 2014.

“Temple announced it was going to cut baseball about a week before we went home for Christmas break, so there was a lot of uncertainty going into that season. It was bad luck and good luck at the same time. We had a lot of good players leave, so it really opened up a lot of opportunities.

“I unfortunately hurt my knee about two weeks before the season, so I couldn’t open up the season, but four weeks into the season, I had my chance to keep pitching. The more chances I got, I kept throwing better and better. The more I kept throwing well, I started reaching out to teams of a high tier, like Clemson, hoping they would give me a shot.

“And so here I am. I love it here. This is the best choice I could’ve made. I’m really happy here.”