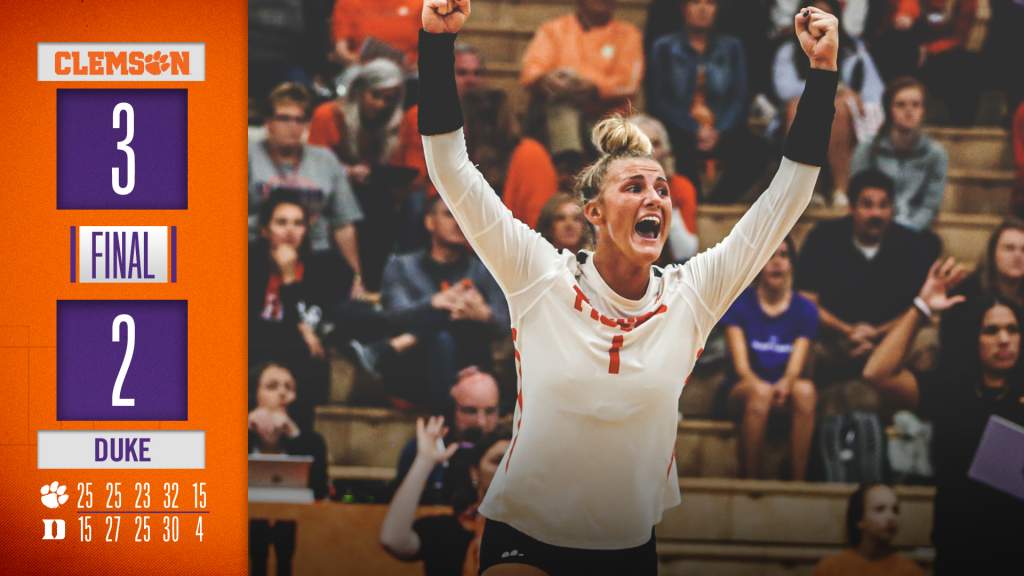 CLEMSON, S.C. – Clemson outside hitter Kaylin Korte tallied a career-high 30 kills, which is tied for eighth all-time in a single match in Clemson history, in the Tigers’ comeback win (25-15, 25-27, 23-25, 32-30, 15-4) over Duke Friday evening in Jervey Gym. Friday’s match marks the first five-set victory of the season for Clemson. Korte’s 30 kills are the most by a Tiger in a single match since Brittany Ross tied for the all-time record of 32 kills against Maryland on Nov. 18, 2005.

Korte registered nine of her 30 kills in the opening frame and hit .438 to lead Clemson to a dominant 25-15 first-set win. She also spearheaded an 8-0 Tiger run, which gave Clemson a 21-11 lead late in the set, with three kills of her own.

After dropping sets two and three by just two points each (25-27, 23-25), Clemson was once again neck-and-neck with the Blue Devils deep into the set, this one the fourth. Duke had set and match point, 24-23, but the Tigers displayed their poise and went on to take game No. 4, 32-30. The fourth-set victory marked the most points in a single set that Clemson has played in since its 3-1 victory over Villanova on Sept. 14, 2018, when the Tigers won the deciding fourth set by the exact same score, 32-30.

🙌🙌🙌 Senior Emily Curtis comes up with the HUGE ACE to send it to a deciding fifth! CLEMSON takes the fourth in extras, 32-30!

With all of the momentum and an energized Jervey crowd behind them, the Tigers defense forced the Blue Devils to hit -.222 for deciding game as Ava Pritchard (3), Korte (2) and Mckenna Slavik (1) combined for 3.0 blocks to down Duke, 15-4.

🎥 The final play to seal the fifth and match!!#ClemsonVB🏐 pic.twitter.com/nNx7LMvBpA

The Tigers also received a nice boost defensively from Madi Howell, who got the nod at libero and tallied 24 digs, one shy of her career-best which she set in Clemson’s most recent match at Virginia Tech (Oct. 11). Emily Curtis chipped in 15 digs as Howell and Curtis’ combined 39 digs on the night, the most for the Tigers’ back row duo this season.

Additionally, freshman setter Mckenna Slavik registered a season best in an ACC match with 50 assists and tallied her fifth double-double of the season as she finished with 11 digs.

Up next, Clemson (8-10, 2-5 ACC) returns to Jervey Gym on Sunday, Oct. 20 at 5 p.m. to take on Wake Forest for Clemson’s annual Dig Pink match. Sunday’s contest is set to air on RSN, a Fox Sports affiliate. For the Tigers’ complete 2019 schedule, click here. 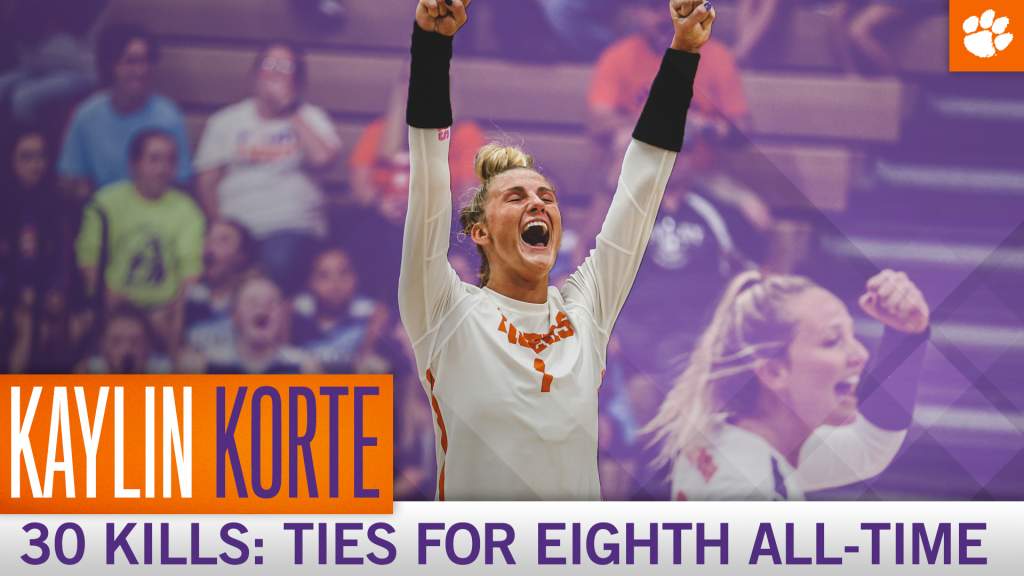