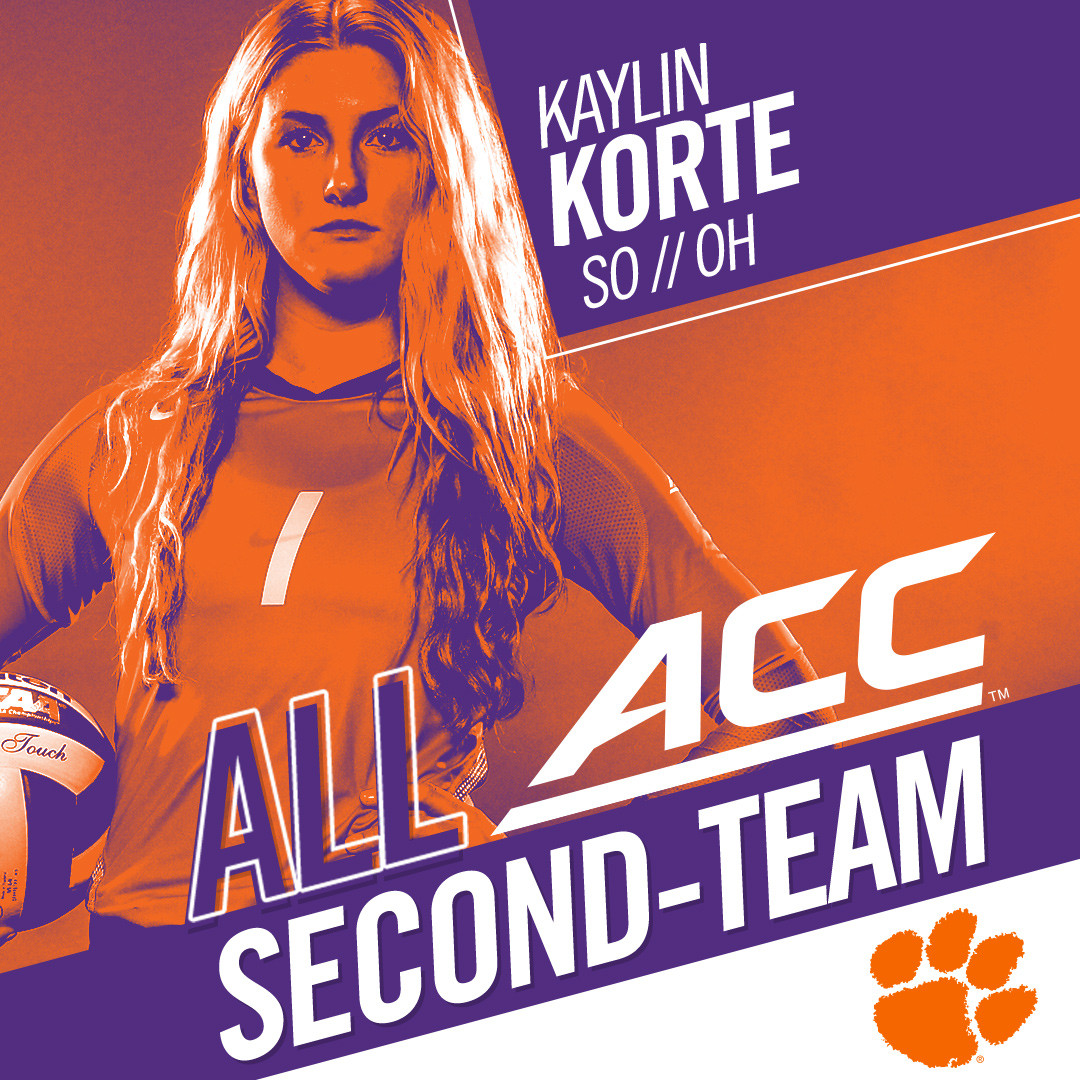 CLEMSON, S.C. – Sophomore outside hitter Kaylin Korte has been named to the All-ACC Second Team as voted by the league’s head coaches, it was announced Monday. Korte becomes the 59th player in Clemson history to nab a spot on an all-conference team, and 27th player to garner second-team honors, dating back to 1980.

“We are extremely proud of Kaylin and her honor,” said Clemson head coach Michaela Franklin. “Kaylin does more for us beyond her statistical categories and I couldn’t be more proud of her for the growth she has made through the course of the season, for her belief in the vision of our program, and for embodying Championship Behavior. I am thankful we have her for two more years as the impact she is having on our program is very significant. This is a well-deserved honor for all that she does for our team and our program.”

Korte, a six-rotation player for the Tigers this season, led Clemson in kills per set (3.36) and points per set (3.85), both of which put her ninth among ACC leaders. The Morris, Ill., native also ranked second on the team in digs per set (2.23). For the season, Korte totaled 349 kills, 232 digs and 50 blocks, including 11 solo, and a team-best 21 service aces. Korte started in all but one of the Tigers’ 32 matches this season, missing just one match with a back injury.

Korte, a transfer from the University Illinois, tallied five double-doubles on the year, including a season-high 18 kills and 11 digs in a five-set win over Jacksonville in the Tigers’ second match of the season. One of her best matches of the season came at Yale on Sept. 2 in which she posted a team season-high .481 hitting percentage, while racking up 17 kills – also a team-best in a three-set match this season. Her 16 kills, eight digs and 3.0 blocks and .324 hitting percentage in Clemson’s sweep over Boston College on Oct. 20, proved to critical in helping the Tigers collect their first ACC win of the season.

Sophomore OH Kaylin Korte posted her 14th double-digit kill match of the season, collecting a match-high 16 kills in tonight’s win over BC! pic.twitter.com/uMxdvEnxDc

Defensively, Korte tallied her season-high 15 digs on two occasions, notching 15 digs, while adding 13 kills, in the Tigers’ opening match of the season, a four-set win over Bethune-Cookman. In Clemson’s fifth match of the season against Rhode Island, she posted her third double-double of the season, tying her season high of 15 digs and adding 14 kills. Her season-high of 5.0 blocks came in one of the closest matches of the season – a four-set loss at Wake Forest in which each set was decided exactly by two points. A late third-set block by Korte gave the Tigers a 21-20 lead before going on to take the set. Korte tallied four of her 21 service aces on the season against NC State on Oct. 1.