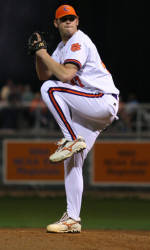 Junior righthander David Kopp pitched 7.0 solid innings to lead #16 Clemson to an 8-5 victory at Virginia Tech in front of 180 fans at a chilly English Field on Saturday afternoon. Clemson, who earlier in the day completed the series-opening win, took a 2-0 lead in the series. The Tigers also improved to 22-9 overall and 7-4 in ACC play. The Hokies dropped to 16-16 overall, 4-10 in the ACC.

Taylor Harbin gave the Tigers an early lead when he blasted a solo homer over the fence in left field in the first inning. It was his third long ball of the season.

In the second inning, Clemson upped its lead to 4-0. Doug Hogan led off with a walk after being down 0-2 in the count. Alex Burg followed with a double to right field to move Hogan to third. D.J. Mitchell then lifted a fly ball to shallow right field that fell for a single to plate Hogan. J.D. Burgess slapped a grounder to Sean O’Brien at first. Burg broke for home and would have easily been retired with a good throw, but O’Brien booted the ball, allowing Burg to score and Burgess to reach safely. Addison Johnson moved the runners up a base on a sacrifice bunt and Brad Chalk grounded out to second to score Mitchell.

Virginia Tech cut Clemson’s lead in half in the fourth inning after the first two batters of the inning struck out. Warren Schaeffer singled through the left side to start the rally then Matt Hacker reached on an infield single to third base. Steve Bumbry plated both baserunners with a double off the wall in right-center, the Hokies’ first extra-base hit of the series.

The Tigers came right back and added a run in the fifth inning. Chalk laced a one-out double to left and scored on Harbin’s single to right field.

Clemson tacked on three insurance runs in the eighth inning. Ben Paulsen started things off with a leadoff single to left field. Two batters later, Burg walked and Burgess loaded the bases with an infield single. Wilson Boyd, who entered the game in the fifth inning, then slapped a two-run single through the left side to score Burg and Mitchell.

The Hokies scored three runs in the ninth inning. Pinch-hitter Luke Padgett reached on an error and came around to score on a two-out double down the left-field line by Matt Foley. Nate Parks followed with a bloop double to left to score Foley. Sean O’Brien then laced a single through the right side to plate Parks and Bryan Thomas singled through the left side to bring the potential tying run to the plate. But Anthony Sosnoskie grounded out to end the game.

Clemson and Virginia Tech will play game-three of the three-game series on Sunday at 1:00 PM.