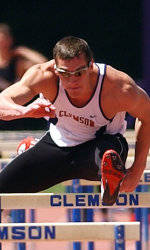 Koontz Leads Decathlon at Tiger Multi-Event Open After Day One

Clemson, SC – Ryan Koontz leads after day one of the decathlon at the Tiger Multi-Event Open, held at Clemson’s Rock Norman outdoor facility. The 2006 All-American decathlete has a point total of 3,742 heading into the final five events Tuesday.

Koontz has already posted an NCAA provisional qualifying total in the decathlon and was runner-up at the ACC Championships last month. He ranks fourth on the school’s all-time list, but hopes to improve on his point total of 7,139 from ACCs.

Koontz was impressive in the high jump on Monday, clearing a season-best 6’9.5″. He fell just shy of qualifying for regionals in the event on his last bar. He also improved on his long jump effort from the ACC outdoor meet with a leap of 21’2.5″. Koontz had a solid shot put effort of 41’4.25″ as well.

Joey O’Rourke is third in the standings with 3,119 points after day one. The Mt. Pleasant, SC native posted a personal best of 11.19 seconds in the 100m dash and also did well in the high jump, clearing 6’0″ for the first time.

The decathlon concludes Tuesday with the 110m hurdles, discus throw, pole vault, javelin throw, and 1500m. The full squad will return to action this weekend for the Georgia Tech Invitational in Atlanta, GA.