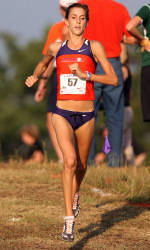 CLEMSON, SC – Clemson junior Kim Ruck will compete in the NCAA Cross Country Championships on Monday in Terre Haute, IN. The women’s 6000m race will take place at 12:00 PM local time at the LaVern Gibson Championship Course. This will be Ruck’s second competition of the season on this course, as she previously competed in the Pre-NCAA Nationals event in October.

Ruck is the first Clemson female in 17 years to advance to the NCAA Cross Country Championships. It also marks the third time this calendar year that Ruck will compete in the NCAA national meet. She was an All-American in March during the 2010 indoor season, and then participated in the 10K at the outdoor national meet in June. She is the first Clemson female since Mareike Ressing in 1993 to compete in all three NCAA national meets in the same calendar year.

Ruck earned a spot in the field by virtue of a sixth-place individual finish at the NCAA Southeast Regional ten days ago in Louisville, KY. She recorded a personal best at E.P. “Tom” Sawyer Park with a 6K time of 20:20.7. Ruck led the Tiger women’s team to its best finish (eighth) in over a decade.

Clemson has produced nine All-Americans throughout the history of the women’s program. The most recent All-Americans for Clemson were Anne Evans and Ressing during the 1990 NCAA Championships. The best individual finish in Clemson history came in 1986 when Ute Jamrozy placed fourth at the national meet.