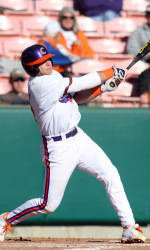 Junior catcher Spencer Kieboom went 5-for-5 to lead Clemson’s 18-hit attack in the Tigers’ 11-8 win over Georgia Tech in front of 3,626 fans at Russ Chandler Stadium on Sunday afternoon. The Tigers, who won the series 2-1, improved to 26-19 overall and 14-10 in the ACC. The Yellow Jackets dropped to 26-19 overall and 10-14 in ACC play. It was Clemson’s first series win at Georgia Tech since 1996, as the Yellow Jackets had won the previous seven series against the Tigers at Russ Chandler Stadium.

The win was Jack Leggett’s 1,215th in his career as a head coach and moved him into sole possession of 14th place on the coaching wins list at the Division I level. He passed Richard Jones, who ended his career at Illinois with 1,214 victories as a Division I head coach.

It was a career day for Kieboom, a native of nearby Marietta, GA. He totaled a career-high five hits, as he had never had more than three hits in his first 123 career games. It was also the first five-hit game by a Tiger in 2012. Kieboom went 10-for-15 (.667) with a homer, double, seven RBIs, and four runs in the series, as he raised his batting average from .230 entering the series to .277.

The Tigers grabbed the game’s first lead in the first inning after the first two batters of the frame were retired. Richie Shaffer and Phil Pohl drew two-out walks, then Jay Baum blooped a single to left-center to score Shaffer.

In the second inning, Kieboom led off with a single up the middle, but he was erased on Brad Felder’s fielder’s choice. Two batters later with two outs, Steve Wilkerson hit a pop-up in the infield that fell for a single when the ball was lost in the sun. Thomas Brittle reached on a throwing error by third-baseman Sam Dove that allowed Felder to score from third.

Jason Stolz belted the first pitch of the top of the fourth inning over the fence in left field for a home run, his fourth long ball of the season. Wilkerson followed with a single up the middle and Thomas Brittle grounded a double up the middle to move Wilkerson to third and extend his hitting streak to 18 games. Two batters later with one out, Pohl was intentionally walked to load the bases, then Baum walked on five pitches to bring home Wilkerson. Jon McGibbon followed with a single to right-center to score Brittle and Pohl, then Kieboom lined a single to left-center to score Baum, giving Clemson a 7-0 lead.

The Yellow Jackets responded with four runs in the bottom of the fourth inning. Brandon Thomas led off with a single through the right side. Jake Davies then belted a 1-2 pitch over the fence in right field for a two-run homer. Daniel Palka followed with a double to right field, then Zane Evans flared a single to right field. Mott Hyde hit a grounder to third-baseman Richie Shaffer, who booted the ball as Palka scored. It was Clemson’s first error of the series. Thomas Smith’s groundout to short moved the runners up a base, then Connor Lynch grounded out to short to score Evans. Kyle Wren and Dove followed with two-out walks to load the bases, but Gossett entered the game on the mound and struck out Thomas on four pitches to end the inning.

Hyde led off the sixth inning with a walk and stole second, then Smith walked on four pitches as Hyde advanced to third on a wild pitch. Two batters later with one out, Wren bounced a double over the glove of McGibbon at first to score Hyde. Dove walked to load the bases, then Thomas reached on a fielder’s choice as Dove was retired at second and Smith scored.

In the seventh inning, Kieboom led off with a single through the left side and Felder followed with a bloop single to right-center. After Stolz moved the runners up a base with a sacrifice bunt, Wilkerson grounded a single up the middle to plate Kieboom and Felder.

The Tigers added to their lead in the eighth inning. Baum reached on an infield single with one out and McGibbon lined a single to right field. Kieboom followed with a single to right-center to score Baum, then Felder grounded a single through the right side to score McGibbon.

In the ninth inning, Thomas lined a one-out double to right field, then Davies belted an 0-2 pitch over the fence in right field for a two-run homer, his second long ball of the game and seventh of the season. Palka reached on a fielding error by Wilkerson at second, then Evans struck out for out #2. With the potential tying run on deck, Hyde flied out to right field to end the game.

Clemson will take five days off for final exams before returning to action in a three-game series against College of Charleston at Doug Kingsmore Stadium starting Saturday at 6:30 PM.