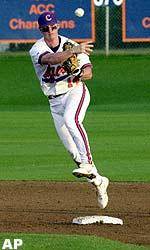 Clemson, SC – Unanimous 2002 National Player-of-the-Year Khalil Greene will formally be given the Dick Howser Trophy prior to the Homecoming game against Wake Forest Saturday. He will be given the trophy at approximately 3:25 Saturday, as members of the Dick Howser Trophy will be on hand to present him with the award on Frank Howard Field. Greene was recently named one of the 50 greatest players in ACC history and just completed his first summer in the San Diego Padre minor league system.

The entire 2002 team will also be recognized for its College World Series appearance and third-place national finish.

Please see the following website for more information on the award and Greene… http://www.sportswriters.net/ncbwa/news/howser02.html.