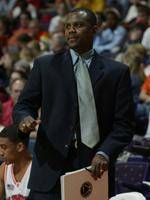 Kevin Nickelberry Named One of Top 25 Basketball Recruiters in Country

Men’s basketball assistant coach Kevin Nickelberry was named one of the nation’s top 25 recruiters, according to a list released by Rivals.com. Nickelberry is one of six ACC coaches on the list.

Nickelberry, who joined the Tigers’ staff after the hiring of Oliver Purnell, has been listed among the top 20 assistant coaches in the nation by various media services, including Basketball Times and Hoop Scoop. He was a significant reason UNC-Charlotte had top 20 recruiting classes in 2002 and 2003.

Nickelberry has helped put together an impressive initial recruiting class for Head Coach Oliver Purnell and his staff at Clemson this year. The Tigers have signed five players for 2004-05, including in-state product Sam Perry. A star at nearby Woodmont High, Perry is a top 100 player according to Prepstars and TheInsiders.com.

Clemson also landed a pair of bluechip North Carolina recruits in Troy Mathis and James Mays. Mathis is listed as a top 100 player by Prepstars, while Mays is ranked in the top 150 of at least three media services. Cliff Hammonds, a point guard from Cairo, GA, and Cheyenne Moore, a wing player from South Kent, CT are also regarded as prominent players by various services.

Frank Haith, formerly an assistant at Texas and now head coach at new ACC member Miami(FL), was named the top recruiter in the country by the service. Four other ACC assistants made the list, most notably North Carolina assistant Steve Robinson, the former Florida State head coach. Others named to the list from the ACC included Larry Harris at N.C. State, Stan Jones at Florida State, and Dean Keener at Georgia Tech.

On May 18, Rivalshoops.com released its final top 25 team rankings for the 2004 basketball recruiting class. Clemson’s group of five players was listed as the #22 class in the entire country.