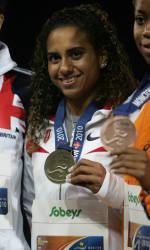 Kendrick blazed to a personal best time of 22.99 and dominated the 200 final on Friday evening. With the victory, she became the first Clemson track & field athlete to win an event at the World Junior Championships since Tony Wheeler won the men’s 200 at the 1994 edition of the meet. She improved on her personal best over three tenths of a second.

The native of Gastonia, NC then led off for Team USA in the 4×1 final on Saturday. She ran a great opening leg to propel the relay to a U.S. record at the World Juniors (43.44). The U.S. team finished three tenths of a second ahead of its closest competitor.

“We’re extremely proud of Stormy’s efforts at the World Junior Championships,” said Lawrence Johnson, Clemson’s Director of Track & Field. “It capped what was a phenomenal rookie season for Stormy. She has gained invaluable international experience that will pay off big-time as she progresses in her career with the Tiger program.”

Warren Fraser competed in the men’s 100m dash as well as 4x100m relay for his native Bahamas. He finished 10th in the semifinal round of the 100m dash after putting together a season-best 10.46 in the prelims. He then participated with the country’s 4x100m relay, where he helped the squad to a time of 40.58 in the prelims.

Claudio Delli Carpini also competed at the World Junior Championships. The freshman posted a time of 14.10 in the 110m high hurdles for Italy in the preliminary round.