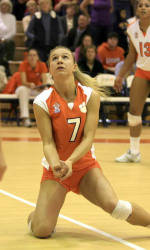 CHICAGO – Setter Kelsey Murphy led the Clemson volleyball team to a 3-0 (25-17, 25-16, 25-17) win over the Western Illinois Leathernecks in the DePaul Challenge on Saturday morning. The Tigers improved to 4-1 behind a .400 hitting percentage and only nine total errors against the Leathernecks (2-5), who were coming off a win against host DePaul the previous night.

The story of the match was the Clemson offense, which was relentless throughout the match. Cansu Ozdemir had a career high 10 kills in 18 attempts, with no errors, and freshman Lia Proctor registered nine kills.

It was Murphy, however, that guided the Tigers to such a performance, notching 38 assists in only three sets, to go along with seven digs and five blocks. She may have been motivated by the fact that she stood across the net from her sister Bridget, how is a defensive specialist for the Leathernecks. Bridget recorded eight digs in the match, but was on the receiving end of an emphatic kill by Kelsey.

In all, the defense held WIU to a .179 hitting mark, and recorded nine blocks. Didem Ege stretched her streak of double-digit digs to an even 50 matches. She had already picked up 10 by the end of the first set, and had 21 overall.

Western Illinois came out strong in the first set, mounting an 11-8. Hoover didn’t like what she saw and called a timeout after a Megan Toczek kill. The Tigers responded with a 13-2 run to take command of the set. The Tigers netted 17 kills against only four errors to take the set, 25-17.

The second set was all Tigers, who recorded an incredible 21 kills and only three errors, of which Murphy had 17 assists.

The third set was tight in the beginning. But, another well-time Hoover timeout trailing 13-8 sparked the Tigers to victory. Out of the timeout, the Tigers scored 14 of the next 16 points, including an 11-0 run led by Patzin, who had two aces and two kills in the run. Rand also added a pair of kills and blocks during the spurt.

The Tigers return to action at 7:30 pm central to take on host DePaul for the Challenge championship. Fans can follow the game live with livestats, and it will be broadcast through depaulbluedemons.com.