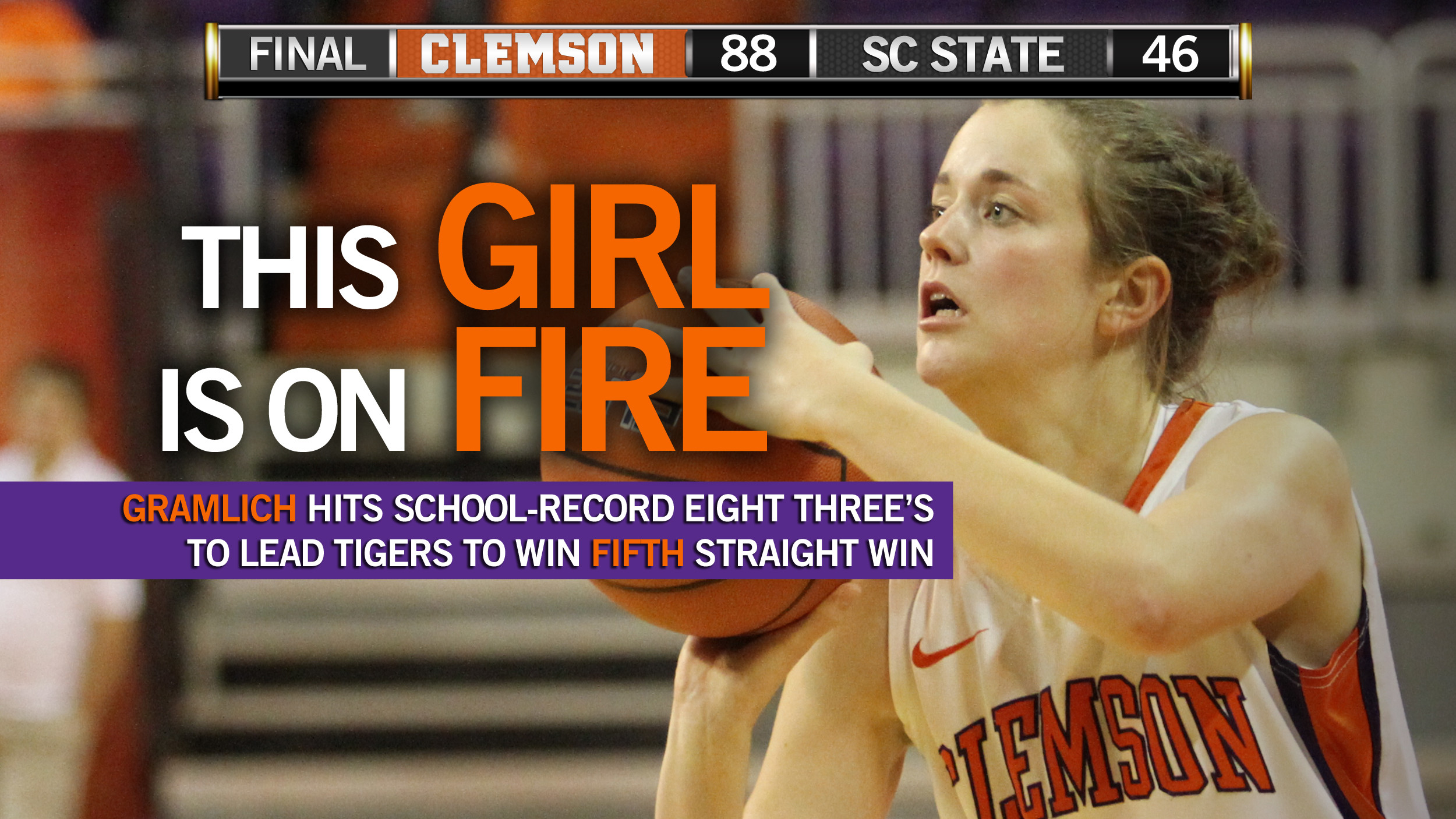 CLEMSON, SC – Junior Kelly Gramlich hit a school-record eight three-pointers in leading Clemson to an 88-46 win over S.C. State (1-5) on Saturday afternoon. Clemson won its fifth straight game overall to improve to 6-3 behind 63 bench points and a school-record 12 three-pointers. Clemson upped its all-time mark to 14-4 against the Bulldogs.  Clemson scored on 39 of its 65 possessions and shot 33-57 (.579), while holding the Bulldogs to just 46 points on .281 shooting. The Tigers had their best offensive effort since scoring 89 points in an overtime win at Ohio on Dec. 14, 2009. Clemson’s efficiency was impressive, as they had 24 helpers on 33 field goals, and four players had four or more dimes.  Orangeburg native Nyilah Jamison-Myers netted a career-best 17 points (7-8 FG, 3-5 FT), with 13 coming in the second half, against her hometown team. Her previous career-best was 16, which she set against the Bulldogs last season.  Nikki Dixon (12 points, 5 assists) and Chancie Dunn (12 points, 6 assists) also scored in double-figures for the Tigers, who have won five in a row for the first time since the 2008-09 season.  Clemson opened the game on a 19-2 run over the first eight-plus minutes, and stretched the lead to 23 at 27-4 with 9:02 to play in the first half. The Tigers led by as many as 29 (38-9) after Gramlich’s fourth three-pointer of the half with 5:11 to play.  The Tigers stretched their lead to 40 midway through the second half, and cruised to the victory by 42, their largest margin of victory since defeating the Bulldogs, 83-38, in the 2011-12 season.  Clemson will play the next three away from home at the Duel in the Desert in Las Vegas, NV, from Dec. 19-21. They’ll take on UNLV, Creighton, and Oregon State at the Cox Pavilion at UNLV.  Player of the Game: Kelly Gramlich – the junior from Austin, TX scored 24 points – all on three-pointers – and set a school-record with eight treys Stat of the Game: 24 – Clemson had a season-high 24 assists on 33 field goals, including 15 on 17 first-half field goals.  Individual Notes

Audra Smith Postgame Quotes: “The only stat I am looking at that I not happy with is the free throw line, but I am so excited for Kelly Gramlich. She has been phenomenal in the last week of practice and shooting the ball with a lot more confidence. I commend her teammates for finding her. I tell Nikki Dixon all the time in practice that she is best at finding Kelly Gramlich. Kelly just relaxes and lets it fly. I am so so proud of her and the way she played.” “Nyilah Jamison-Myers, you have to be proud of her. The biggest thing I am stressed to the post players is just catching the ball. We have so many guards that create for themselves and their teammates, our kids just have to catch the ball. She did a great job of catching and finishing. Paige Mosley came in and gave us some really great minutes, and that’s exactly what we need.” “I am really proud of these girls. They played tremendously together. They’re sharing the basketball. They are so excited when teammates score. They played a great team game tonight.” Kelly Gramlich Postgame Quotes: “After practice I’ve been getting on the gun and knocking them down and working on repetition so I was ready and I was feeling good. I actually did, [know what the school record was] because my freshman year I tied it against North Carolina Central. I never think about that but then once I started getting close up there I decided ‘I’m not going to stop shooting because Coach Smith never wants me to do that. On playing against the zone I honestly like it when teams play zone because I get a lot of open looks but I think it’s better for the team when teams play us in man so I’m hoping that by me making threes teams will come out of the zone more and play us in man because I think we’re more successful as a team against man, even though tonight we were making shots. On playing off Nikki Dixon “Just watching the game you can tell that most of those shots I cannot create by myself and that’s from my teammates. Nikki [Dixon] had five assists, Chancie [Dunn] had six, Chelsea as well. They were finding me every which way giving me great open looks and there’s no way I would hit any of those without them.  [&lt;a href=”//storify.com/ClemsonTigers/clemson-vs-sc-state” mce_href=”//storify.com/ClemsonTigers/clemson-vs-sc-state” target=”_blank”&gt;View the story “Clemson vs. SC State (Dec. 14, 2013)” on Storify&lt;/a&gt;]