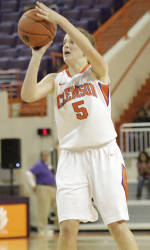 Clemson’s Kelly Gramlich has been named the ACC Women’s Basketball Rookie of the Week for her play in Sunday’s contest, where she notched 20 points. Gramlich is the second Lady Tiger to win the award this season, as Nikki Dixon was voted on the first week of the season. Clemson is the first school to have two different players named to the rookie list this season.

After nearly a four-year drought without a Rookie of the Week, the Lady Tigers have had two honorees this season. It is just the thrid time in school history that two different players have been named ACC Rookie of the Week in the same season, with the most recent coming in the 2001-02 season.

Gramlich leads Clemson into Providence for a Thursday showdown before the Lady Tigers break for Christmas.