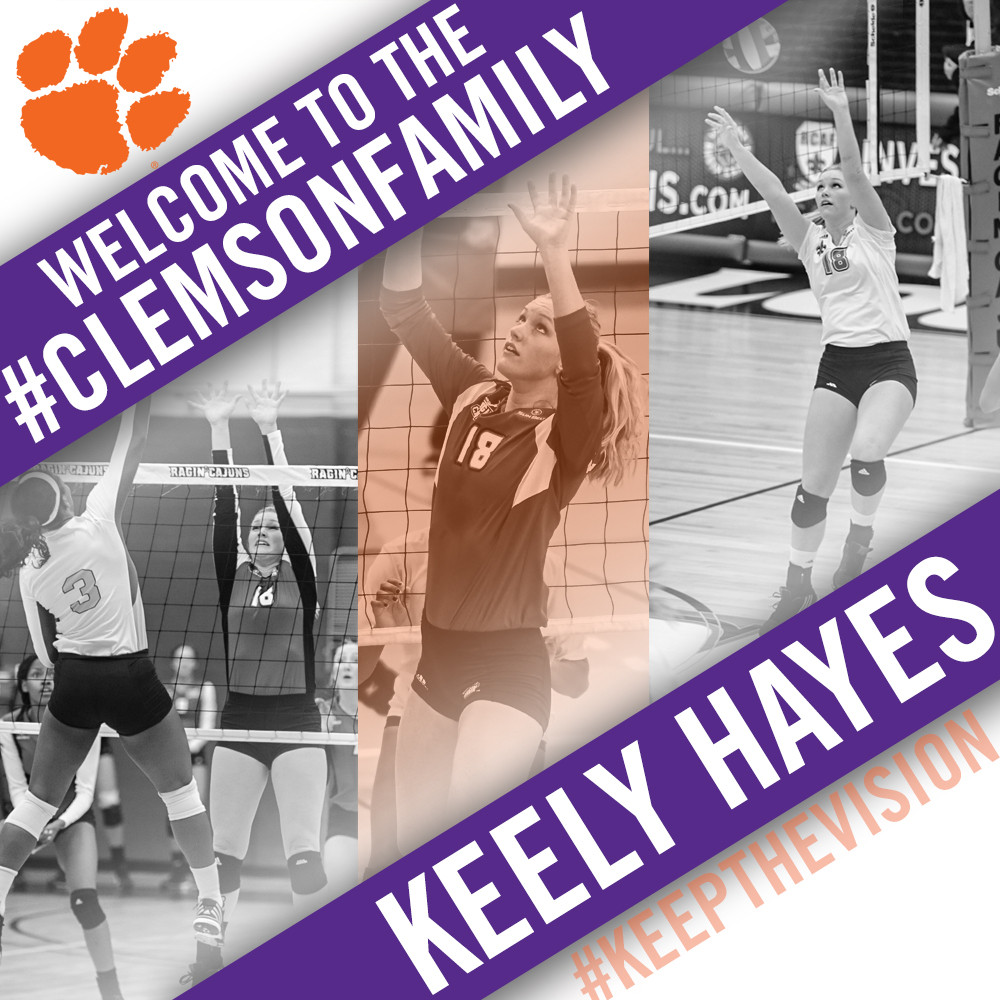 CLEMSON, S.C. – Clemson continues to add to its 2016 roster with the addition of former Louisiana Lafayette setter Keely Hayes. The Cypress, Texas native will join the Tigers for her junior and senior seasons.

“We’re absolutely thrilled with Keely’s decision to transfer to Clemson,” said head coach Hugh Hernesman. “We’ve known Keely since her sophomore year in high school and are very familiar with her. She is, first and foremost, a very talented volleyball player.”

“I am beyond thrilled to be playing for Hugh and Steph for my last two years of collegiate volleyball,” said Hayes. “It is literally a dream come true for me considering I have wanted to play for them since I was a sophomore in high school. I can’t wait to start this incredible journey with my new volleyball family!”

The Rajin’ Cajuns looked to Hayes as their starting setter midway through the season last year after she had served in a hitting role during the first half of the season. In her first match as ULL’s starting setter, she finished with 27 assists, five kills, a .273 hitting percentage, eight digs and four blocks.

She went on to record 307 assists and a 6.98 assists per set average over the course of 44 sets in 12 matches. She finished the year with 10 of her 12 matches as the starting setter with 20 assists or more, four of which she tallied 30 or more, including a 37-assist effort in four sets against Troy in which she also generated 15 digs, five kills and two service aces. The 37-assist, 15-dig performance was just one of her three double-doubles last season.

“On top of Keely being a talented setter, she’s also a very skilled defender, attacker and passer,” Hernesman added. “Her skill in all of these areas has been utilized at the high school, club and collegiate levels- oftentimes being called on to play in a valuable passing and hitting role. We view Keely, however, as a setter and she will join our program in this capacity. Keely has great experience running a faster tempo and complex offense at ULL. Additionally, Keely will provide an offensive component as well as a physicality and strength as a blocker that will be nice to have from that position.”

Last season, opposing defenses had to account for Hayes hitting as well, as she registered 95 kills and a 1.28 kills per set average. She also aced her opponents a total of 18 times. The all-around talent complemented her efficiency on offense by being active on defense, finishing 2015 with 141 digs and 17 total blocks.