Kameron Jones has been competing in track and field since he was nine years old and living in San Diego, California. A love for the sport and the feeling of running fast was what fueled Jones’ early years of participation, and while his passion has always been prevalent, his true talent remained hidden for a long time.

That talent would emphatically emerge while Jones was under the spotlight during the final of the men’s 800 meters at this year’s ACC Outdoor Championships. With an ACC title up for grabs, Jones made history by setting a school record, meet record, facility record, and running the second-fastest time in the nation this season by crossing the line in 1:45.47. In breaking Paul Ereng’s 33-year-old meet record, Jones had solidified himself as one of the all-time greats in ACC middle distance history.

Jones found his way to Clemson after spending four years primarily racing the 400 meters at the University of Maryland while earning his degree in Government and Politics. As a quarter-mile specialist, Jones was able to accomplish many great things as a Terrapin, including four school records and multiple top-10 all-time marks. But what changed the tide for Jones and allowed him to elevate from being good at 400m to ultimately becoming a great 800m runner was the introduction of the indoor 600m.

“After running in the 1:16’s [for 600m] in my sophomore year, I knew I had a little more strength than I thought I did,” reflected Jones. “Going into my junior year, I kept running the 600m and kept running 1:16, which gave me the opportunity to race at the USA Indoor Championships in 2019. I got to run against great professionals [at the meet] like Donovan Brazier, Chris Giesting, Erik Sowinski, and I ran 1:15.32.”

His consistency at 600m spurned the idea that success could also be found at 800m, since Jones viewed it as, “only 200 more meters.” Jones went on to break 1:50.00 for the first time in his career with a then personal-best time of 1:49.79 back in 2019. What made Jones’ accomplishment all the more impressive was that he was able to go sub-1:50 during his fourth collegiate 800m race. Fast forward to the final indoor season of Jones’ career in 2020, the California native was unable to break 1:50 during his two races at 800m, as his focus remained on the quarter-mile event.

When the COVID-19 pandemic prevented Jones from competing in his final outdoor season at Maryland, he began to line up employment opportunities while also testing the waters in the NCAA Transfer Portal. This is where Mark Elliott, Clemson’s Director of Track & Field and Cross Country, enters the picture. Elliott had become quite a fan of Jones after seeing his promising 600m time and raw 400m ability.

Jones ultimately arrived in Clemson last summer in the midst of the global pandemic looking to grow into his natural talent at 800m. Elliott had helped Jones realize his potential during the recruiting process, even going as far as to say he believed Jones could run 1:43. “He [Elliott] told me that I have the potential to be a great athlete,” added Jones. “Elliott spoke to me beyond my one year at Clemson, and for me that was huge.” 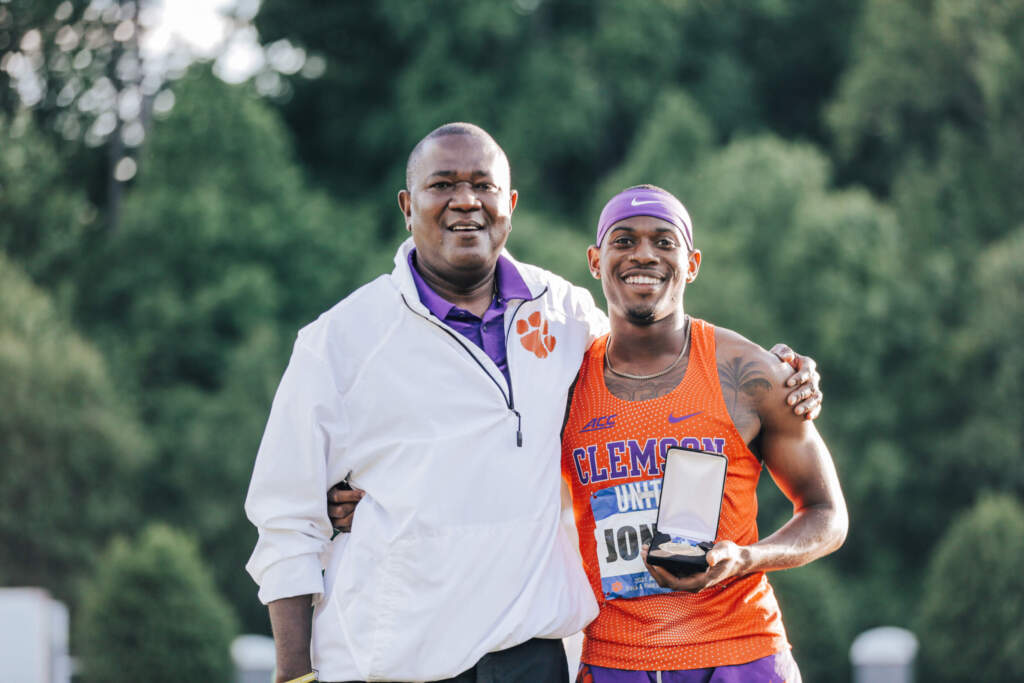 Since his arrival in Tigertown, Jones has been fulfilling his potential thanks to being a part of a great group of athletes and trusting the prescribed training each day. The Tigers have a world-class middle-distance group, as elite athletes such as Natoya Goule, Laurie Barton, Andrea Foster and Rajay Hamilton are just a few of the people who Jones is able to learn from and train with on a daily basis.

The people which he has been surrounded by have allowed him to prepare for big moments in the sport, whether that be racing against professionals or entering the ACC Outdoor Championships as the top seed at 800m. “Being surrounded by successful people rubs off on you,” remarked Jones when speaking about his training group. “I got to see Laurie win [the women’s 800m] right before I got to run at ACC’s, and that kind of reassured me more of how prepared we all were for that meet.”

The work that Jones and his fellow Tigers had put in since last September left him knowing he was ready for his moment in the spotlight, and so just before the starter raised his gun to start the race for the ACC’s 800m title, Jones told himself, “I have never been this prepared before.” With that thought rooted inside of his mind, he went on to deliver one of the greatest performances in ACC history as his parents watched with pride from right outside the stadium.

The performance recorded at the ACC Championships allowed Jones to secure the No. 1 seed in this week’s NCAA East Region Prelims, and after comfortably qualifying out of the first round, Jones has his sights set on advancing to the NCAA Outdoor Championships while dawning the Clemson Orange and Regalia.