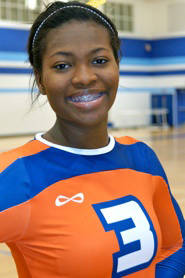 CLEMSON, SC – Jolene Jordan Hoover announced the signing of Georgia AAA Player of the Year Kalah Jones (pronounced KAY-lah) to a Letter of Intent to attend Clemson University for the 2012-13 class. Jones is the lone member of the class, as the Tigers have just one senior on the current roster.

“We are excited about adding Kalah to our team and program,” said Jolene Jordan Hoover “She comes from a very successful high school and club program and we feel that she will fit in well with our current team. We love her athleticism and competitiveness.”

Jones, an outside hitter from Fayetteville, GA, will enroll for the 2012 season. Jones attends Sandy Creek High School in Tyrone, GA, where her team just won the AAA Georgia State Championship.

Jones was a Prevolleyball.com All-American watch-list member and played club volleyball for Atlanta Crush Volleyball. Jones also plays for Sandy Creek’s varsity basketball team, where the six-footer was an All-County selection in Fayette, GA. She carries a 3.5 GPA and is an all-area and all-state bassist as well.

The Tigers are currently 18-8 overall and 10-5 in ACC play in the 2011 season, and head back on the road this weekend at NC State and North Carolina.