MANHATTAN, Kan. – Despite a fast start and another strong outing behind the service line, the Clemson Volleyball team fell in five sets (25-16, 25-21, 20-25, 19-25, 14-16) to Kansas State  (2-2, 0-0 Big 12) in the Wildcats’ Bramlage Coliseum Thursday night. Clemson’s Kaylin Korte nearly matched her career high of 18 kills, finishing with 17 for the evening. Additionally, six Tigers recorded at least one service ace as Clemson reached double-digit aces as a team for the third consecutive match, finishing with 11.

Clemson jumped out to an early lead, tallying four of their 11 aces in the first set. Korte also recorded a team-best seven digs for the set. The Tigers defense was on full display as Clemson held K-State hitters to a .070 hitting percentage and won the sideout battle by a margin of 68 percent to the Wildcats’ 43 percent as CU took the first, 25-16. In the second, Mckenna Slavik reached her first career double-double, padding the assists and digs columns. Slavik, who finished the second set with 19 assists and 14 digs, set career highs in both assists (48) and digs (17) for the match. Despite, 12 tie scores and six lead changes in a back-and-forth set No. 2, the Tigers closed out the frame by tallying the last five points in their favor as senior defensive specialist Emily Curtis registered a service ace on one of her four consecutive serves to close out the set.

Coming out of the break, the Wildcats embarked on a 9-1 run in the middle of the set that proved to be too great for Clemson to overcome. The K-State defense held Clemson hitters to a .095 hitting percentage as the Wildcats took the third, 25-21. Clemson could not find its footing in the fourth as the Wildcats made another steep run – this time 11-3 – to close out the set, 25-19.

In the decisive fifth set, K-State secured an 8-5 lead before both teams swapped benches. The Wildcats challenged a called attack error, but the call stood, shifting momentum Clemson’s way. On the next play, the Tigers tied the set, 14-14, on a kill by junior Brooke Bailey, who posted 15 kills on the night. K-State won the next two points, taking the set (16-14) and match, while handing the Tigers their first loss of the season.

In addition to Slavik, junior Madi Howell (15), who started at libero Thursday, junior Jori Radtke (14) and Curtis (11) all registered double-digit digs on the night. 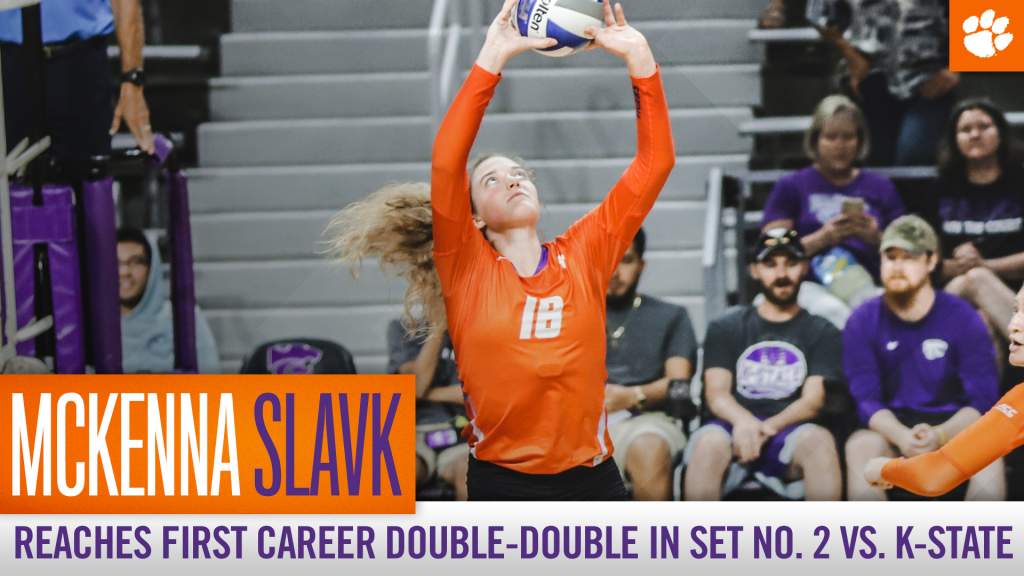