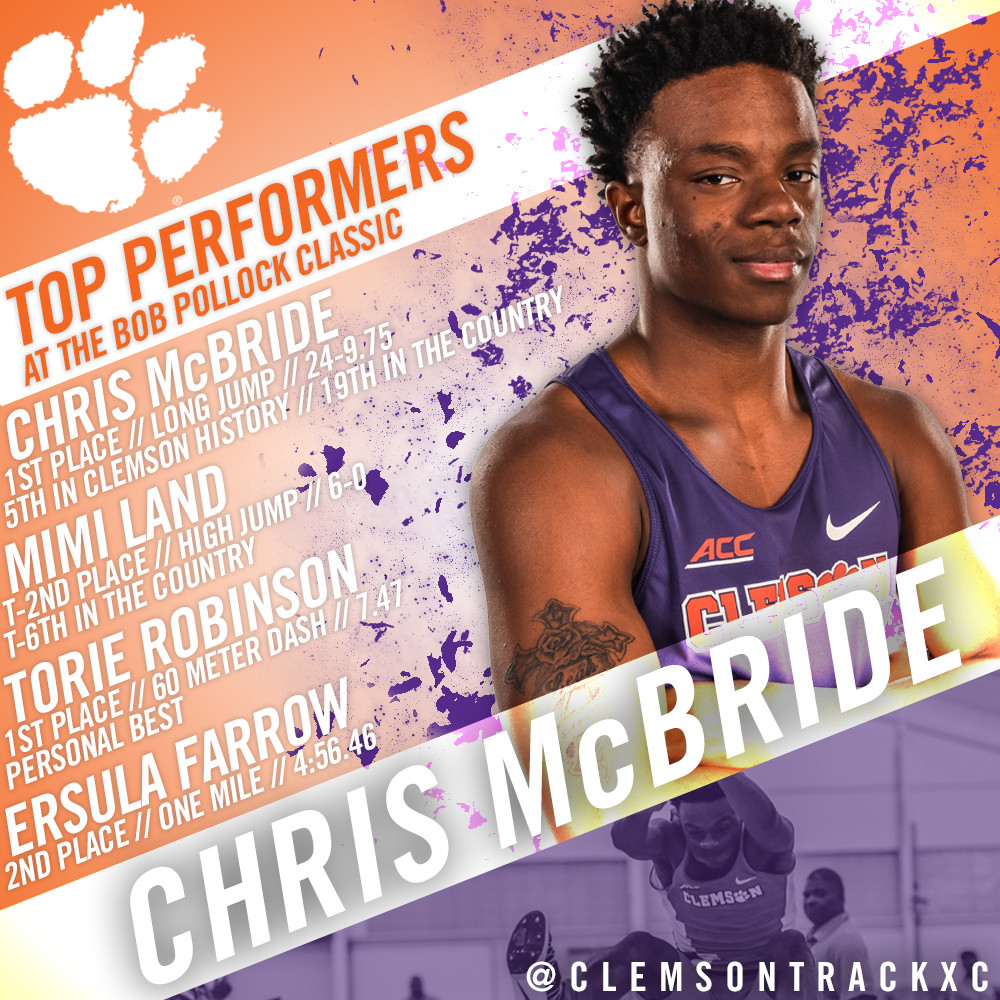 CLEMSON, S.C. – On the first day of competition, Clemson’s jumpers were the ones to stand out among a strong combined effort from the entire track and field program. The Tigers turned in 12 top-three performances as well as nine personal bests, but it was Chris McBride that turned in the performance of the day.

The freshman out of Lithonia, Georgia posted a distance of 24-9.75 in the long jump to win the event and etch his name in the Clemson record book with the fifth best jump in program history. McBride’s mark also stands as the 19th best in the country and the best in the ACC.

Simultaneously, Mimi Land tied for second place in the high jump with a height of 6-0 and fell just shy of tying the Clemson record, nearly clearing 6-0.75. The senior currently is second on Clemson’s all-time list with a mark of 6-0.5. Tonight’s jump is her best of 2016, ties her for sixth in the country and is the best in the ACC.

Anasterasia Terrell turned in a season best 19-0.5 jump in the long jump to place second overall while Harrison Hix won the pole vault with a height of 15-5. Also thriving in the field was Jordan Pickerel and Danielle Borriello. Pickerel threw a personal best 57-4.75 to win the weight throw and Borriello finished fifth with a mark distancing 50-9. Pickerel’s mark betters his ninth place position in Clemson history.

The track saw seven of personal bests, the best of which perhaps came in the women’s 60 meter final as Torie Robinson won the event at 7.47 and Taylor Williams placed second, tying her personal best of 7.54.

In the women’s mile, Katie Fortner turned in her personal best 5:07.33 to finish third behind the second place finisher, Ersula Farrow at 4:56.46. Catherine Herring ran her best time of the season, clocking in at 5:10.01 to place fourth.

In the 400 meter run, Michael Cheeks and Markeeta Thomas each finished in third place. John Lewis and Dareyus Person trailed Cheeks in seventh and eighth place.