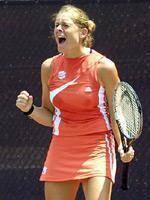 Julie Coin Ranked #2 In The Nation

Clemson, SC – Clemson’s Julie Coin is ranked second in the ITA singles poll released on Mar. 8. The senior from Amiens, France boasts a 21-2 overall record and a 12-match winning streak for a 12-0 mark in dual matches.

Freshman Romy Farah was also listed at #87 in the most recent rankings. The Cali, Colombia native is 6-6 in dual contests and 13-9 overall.

Three Tiger doubles teams were included in the doubles poll. Coin and senior Alix Lacelarie lead Clemson at #35. The duo is 6-1 overall and 3-0 in dual play. Daniela Alvarez and Maria Brito are ranked 36th and the tandem of Coin and Farah is listed 40th.