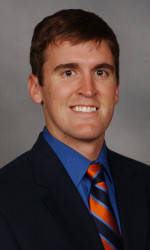 Clemson, SC – Josh Langley of the men’s track & field team has been named East Region Assistant Coach of the Year for jumps and combined events. The announcement was made over the weekend by the U.S. Track & Field and Cross Country Coaches Association (USTFCCCA).

Langley, who is in his first season with the Tiger program, coached three student-athletes to berths in the NCAA Outdoor Championships this week. He helped junior Adam Linkenauger, a high jumper, also earned an invitation to the national meet under Langley’s supervision.

Langley did an outstanding job during indoor season as well. Koontz finished seventh at the NCAA Championships and earned All-America honors in the heptathlon. He coached Fields to his first-ever ACC title in the long jump. He also helped Bell, Greeley, and Koontz to runner-up finishes at the conference indoor meet in Clemson. Linkenauger finished third at ACCs in the indoor high jump under Langley’s watch.

Under his tutelage, Greeley improved on his school records in both the indoor and outdoor pole vault. Langley also guided Koontz to a school record 5,569 points in the heptathlon this indoor season.