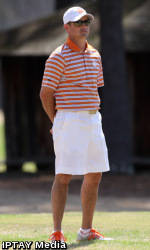 NORMAN, OK – Jim Anderson of Texas A&M, Clemson’s Jordan Byrd and Shane Warren of LSU have been named finalists for the 2012 Jan Strickland Award presented by TaylorMade-adidas Golf as selected by the GCAA. The Strickland Award is presented to the NCAA Division I, II, III, NAIA or NJCAA assistant coach that, among other things, has excelled in working with their student-athletes both on the course and in the classroom.

Anderson is in his third season as assistant men’s golf coach at Texas A&M. Anderson came to A&M after two years as an assistant at New Mexico. A native of Sioux Falls, S.D., Anderson was a four-year letter-winner at New Mexico from 2001-04. Anderson graduated from UNM with a degree in Business-Human Resources in 2003 and completed a Master’s degree in Sport Administration there in 2004.

Byrd is in his seventh year as Clemson assistant golf coach. From recruiting to golf instruction to facility enhancement to overall administration of the program, Byrd has had a positive influence at Clemson. In his first six years with the program, Clemson has finished in the top 20 at the NCAA Championships three times, a number-seven finish in 2006 and a number-five finish in 2008 and a 16th place finish in 2010. The program has had a US Public Links Champion, a US Amateur runner-up and two runner-up finishes at the NCAA Tournament.

A Strickland Award finalist in 2011, Warren is in his seventh season as an assistant coach with the LSU men’s golf program as he is responsible for assisting in LSU’s recruiting efforts, coordinating practice sessions, providing valuable assistance at tournaments and handling all day-to-day responsibilities with the team. Since becoming assistant coach prior to the 2004-05 season, he has helped develop two All-Americans winning five All-America honors and three All-SEC selections winning six All-SEC honors during that span.

The Strickland Award recipient will have the opportunity to further his professional development by receiving an invitation to the TaylorMade-adidas Golf Kingdom in Carlsbad, Calif.

TaylorMade-adidas Golf has sponsored the Strickland Award since its inception in 2003.