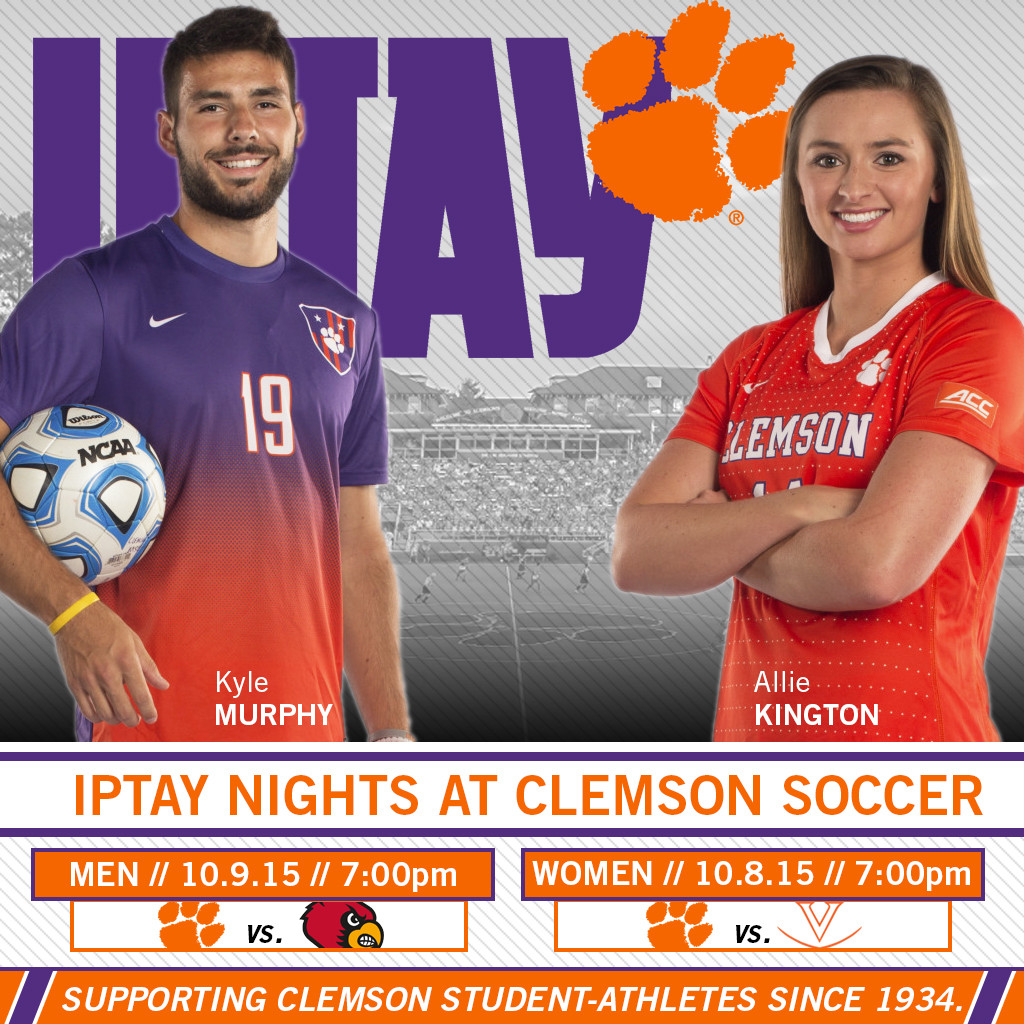 Join Us For IPTAY Nights At Historic Riggs Field

IPTAY has been creating additional initiatives to increase IPTAY exposure to the Clemson Family, grow IPTAY membership, and further build the IPTAY brand. Therefore, over the past year, in addition to the traditional IPTAY Day at a home football game, IPTAY has been expanding its reach to various Olympic sports. Therefore we are excited to announce that Thursday, October 8 and Friday, October 9 have been pegged as IPTAY Nights at Men’s & Women’s Soccer. On Thursday, the women’s team will face off  with Virginia and on Friday the men’s team will play Louisville in a rematch of last season’s ACC tournament final. Both games kickoff at 7:00pm at Historic Riggs Field.

These two nights will include fun for the whole family! IPTAY staff will be set up on the concourse with games and IPTAY giveaways for all Tiger fans who attend. IPTAY members with presentation of their IPTAY 2015 or 2016 membership card will be eligible to purchase $3 general admission tickets to the men’s game on Friday.  A savings of $3 on an adult ticket and $1 on a youth ticket. Active Tiger Cub Club/CATS members will also receive free admission with presentation of valid IPTAY Tiger Cub Club/CAT membership card. Please note that all home women’s soccer games are free admission.  For general men’s soccer ticket information click HERE.

In addition to discounted admission for IPTAY members, members who present their IPTAY membership card at the IPTAY table on the concourse will receive free croakies (limit of four per IPTAY card)!

Also, don’t forget to come out to Historic Riggs Field tonight, October 2, as we celebrate the 100th anniversary of Riggs Field.

Since being founded in 1934, IPTAY has been committed to supporting Clemson student-athletes. IPTAY provides funding for athletic scholarships, new and upgraded facilities and Vickery Hall, the student-athlete academic enrichment center. At IPTAY, our mission is to provide Clemson student-athletes with the total athletic and academic experience. Their accomplishments, on and off the fields of competition, are a testament to the importance of continuing to invest in those areas that directly impact the lives of nearly 500 student-athletes in our 19-sport program.