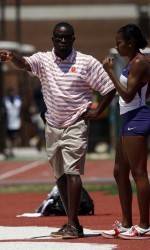 CLEMSON, SC – Lawrence Johnson and April Sinkler were honored Friday as regional award winners by the U.S. Track & Field and Cross Country Coaches Association (USTFCCCA). Johnson was named Women’s Coach of the Year for the Southeast Region, while Sinkler was voted Field Event Athlete of the Year.

Johnson earned a sweep of Southeast Region Coach of the Year honors in 2010. He also claimed the indoor honor in March. He coached the women’s track & field team to its first ACC outdoor championship since 1999. It gave the Tiger program a sweep of the indoor and outdoor conference crowns, a first in Clemson women’s track & field history. His women’s team has also been ranked in the top 10 by the USTFCCCA each of the last six weeks. The Tiger women won the ACC meet by a 53-point margin over second place Florida State.

Sinkler added yet another accolade to her ever-growing collection, and also pulled off a sweep of Southeast Region honors in 2010. The red-shirt sophomore out of Stafford, VA earned the honor indoor as well. Sinkler won the high jump and long jump at the ACC Championships and was named Field MVP for the third time in her career. It gave her a total of six individual ACC championships. She qualified for next week’s NCAA Championships in the long jump and triple jump. She also set the Clemson record in the high jump with a 6’1.25″ clearance earlier this season.