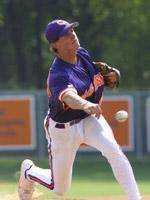 Greensboro, NC – Clemson’s Paul Harrelson were named this week’s Atlantic Coast Conference Baseball Player and Pitcher of the Week, respectively, after leading the Tigers to a 4-1 record on the week including a three-game sweep of Georgia Tech.

Johnson, a product of Georgetown, S.C., was 9-for-18 (.500) on the week with two homers, six RBI and eight walks. Against the first-place Yellow Jackets, the senior first baseman was 6-for-9 with seven walks, reaching base in 13 of his 16 plate appearances. Johnson’s most dramatic moment was Wednesday against East Tennessee State when he hit a towering three-run homer in the 12th inning to beat the Buccaneers.

Senior reliever Paul Harrelson was 2-0 in three relief appearances during the week. He pitched 8.1 innings, allowing just one run on three hits and no walks while striking out 12. He struck out a career-high eight in 6.0 near-flawless innings against East Tennessee State and also earned the win against No. 4 Georgia Tech in game one of a three-game series. On the season the Pauline, S.C., native has a 2.42 ERA to go along with 22 strikeouts and only one walk in 17 appearances.