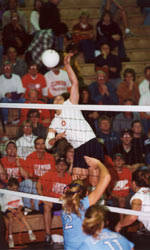 “I am very pleased that Jodi is joining our staff,” said Hoover. “She was a true asset to the Clemson volleyball program during her four years here. She had a great career as a Tiger and will contribute the success from her to the team and staff. She is one the most decorated players in Clemson history will bring her enthusiasm and strong work ethic to the program as a coach.”

Steffes was Clemson’s first four-time All-Region honoree and was a three-time All-ACC second team member (1999-2001). She was named the 1998 ACC Rookie of the Year and that same year was named to the ACC All-Freshman team. Throughout her career at Clemson, she was named to seven all-tournament teams. Steffes ranks fifth on the all-time list for most attempts (3,600) and kills (1,422), ranks eighth in block assists (288) and ninth in service aces (132). She ranks second on Clemson all-time defensive saves list with 1,309 digs and was named to the ACC 50th Anniversary team.

The native of Elwood, IL, graduated from Clemson in 2002 with a degree in elementary education. While completing her student teaching, Steffes served as the head coach of the Walhalla High School volleyball team. She coached the team to the regional playoffs last season.

“I am really excited about joining the Clemson volleyball staff,” said Steffes. “I learned so much from Jolene during my four years of playing here, and I am eager to continue to grow in my coaching career with a head coach that is highly respected at the national level.”