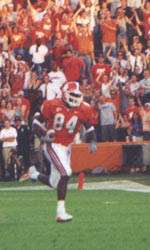 JJ, Great to see you rising to the occasion and your tremendous effort at Georgia Tech. What do you think will be the most important things that need to occur to allow you to maximize your potential at Clemson?Tim Hackett Columbia, SC

For starters, I need to practice every day as hard as I can. If you don’t practicing hard, you can never maximize your potential. And just give great effort all the time.

J.J., Congrats on the win at GT! Your catch in OT for a first down was awesome. You are rapidly becoming one of our go to guys. I was wondering how Kevin Youngblood was progressing. Any chance that he may play before the year is over? Keep up the good work!Andy Wilson Simpsonville, SC

JJ, I would like to say congratulation JJ for all that you have done so far this year. My question is, who is your favorite person out on the practice field? Donna Smith Clemson, SC

Well, I don’t really have a favorite out there on the practice field, but I would have to say that Tavaghn Monts is someone who really gets me going in practice. He is a real funny guy and he just kind of keeps me going.

JJ, With the injuries in the receiving corps, how does it feel to be the “go-to-guy” for Woody? Good luck this season and GO TIGERS!Eddie Lundeen Pelion, SC

I don’t feel like I am the “go-to guy”. You still have Derrick Hamilton out there catching a lot of passes, Matt Bailey is coming along really well, and Travis Zachery is coming out of backfield catching a bunch of passes. Actually, Travis is the second leading receiver on the team. So, I don’t really feel like the go-to guy, but just someone going out there and doing his job.

JJ, Awesome game in Atlanta! You made the most incredible catch in overtime at the 15 yard line! I was glad that I could see it in person! That had to be an emotionally and physically draining game. What kinds of things have you done in the last few weeks to regain your focus for NC State?Kevin Darnell Smithfield, NC

Really, I had to work on my blocking technique. I did a horrible job blocking in the Georgia Tech game, so for the past two weeks I have been working on my blocking and my routes. My routes had gotten a little sloppy.

J.J., After replacing the injured Roscoe Crosby and showing the nation what you can do, do you feel like you have the potential to become a Clemson great like Perry Tuttle and Rod Gardner? GOOOO TIGERS!Ryan Cox Rock Hill, SC

I don’t know. I am just out there and trying to work hard and do whatever the team needs me to do. I feel that I can be as good as I want, it is up to me.

J.J., First of all congratulations on having such a fine season. I really admired how you were playing hurt in the Georgia Tech. My question is, did you always feel if you had the opportunity to play, you could play this well?Walter H. Bell Vienna, VA

Yes, I’ve always felt like that. I got the opportunity early in the season and feel like I have been doing a pretty good job, but I can always do better.

J.J., I am out here in the west , I am originally from sc, but I am in the air force now. I just wanted to let you know that I got people out west liking the tigers. How is your outlook now on winning a big acc game. It would be nice to win the acc for the first time since fsu has been in the league.Tristan Ritchie Tuscon, AZ

After winning that game against Georgia Tech, we feel as though the ACC is wide open. Everybody is sitting at 3-1 except Maryland, and it gives us the opportunity to get back on top as long as we take game one at a time. I also think that it shows that we can come together as a team and pull out the big games, which is important.

JJ, How did it feel to make that 63 yard reception which gave Clemson a huge boost? Do you think because of the win against Georgia Tech that Clemson is mentally prepared after the loss to Virginia?Jordan Vaughan Norcross, GA

I think so. The Georgia Tech game was a big game. The win got us focused again on what our goal was, which was winning the ACC Championship. Since it is wide open again, we feel we have a great opportunity to do it, we just have to take it one game at a time.

JJ, When you were switched over from linebacker, did you envision yourself being as successful as your are now? And, what extra work did you have to do to learn the new position?Eric Sprott Clemson, SC

After being switched over, it was great, but I just wanted to come in a fill a role like everyone else does. But, I played wide receiver in high school, so it wasn’t like I had to learn a position I had never played. The hardest part was probably losing all that weight I had gained for the linebacker position.

Next week’s guest on “Ask The Tigers” is quarterbacks coach Mike O’Cain.